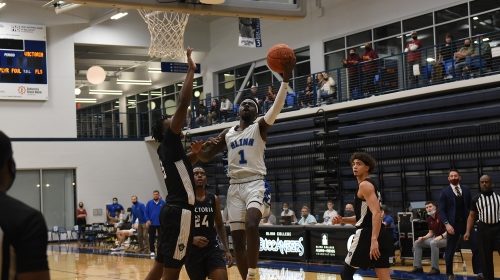 The Blinn College men’s basketball team (1-0, 1-0) opened the 2021 season with a conference win over Victoria College, 99-74, on Wednesday night in the Kruse Center.

“I am just so glad my guys got to play a game and win it like we did,” head coach Scott Schumacher said. “Everybody got to play and have a few highlights, so I am really fired up for them. I like our intensity, how we guarded and rebounded, and think they understand how we want to play.”

Washington led Blinn with five assists, while Judah Jordan and Braelon Seals each had four. Seals also recorded three steals in the win.

“Everybody did their job and did what they had to do to get the win,” Washington said. “We ran the offense, played the defense, and held them to a certain amount of shots. We came into this game ready to play and are going to go into the next game ready to play.”

Washington and Coleman combined for 20 points in the first half for Blinn to climb to a 53-31 lead. Blinn and Victoria played head-to-head early on as the game remained tied 13-13 at the 14:31 mark. Blinn used a 20-2 run, led by Washington with seven points, to break away from the Pirates with a 44-28 lead. The Buccaneers scored eight straight points to finish the half.

Blinn kept the momentum going by scoring eight straight points following the break. Austin Galuppo and Washington shot back-to-back 3-pointers for Blinn to lead 61-31 with 17:17 on the clock. The Buccaneers led by 40 points (86-46) following Washington’s layup with 6:54 remaining. Blinn never let the lead drop below 25 points the rest of the way.

Next, the Buccaneers will continue conference play on the road against Kilgore College on Saturday, January 23, at 4 p.m.