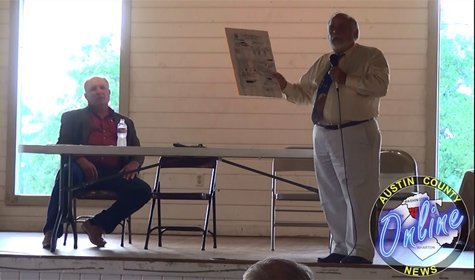 Many in the Austin County Precinct 1 area don’t realize that the election for their county commissioner isn’t done. They don’t realize that the election ended in a runoff and that the two highest candidates failed to get a majority of the votes to establish a clear winner. It is for this reason that the Austin County Republican Party held the Commissioner Precinct 1 Candidate forum last night. The two remaining candidates for the position are incumbent Reese Turner and challenger Mark Lamp.

The forum also featured two state races that are also happening in Texas. The races are for Texas Court of Criminal Appeals Place 2 and place 5. The two candidates running for the position 2 spot are Judge Ray Wheless and Judge Mary Lou Keel. Both candidates were present for the forum. The candidates for position 5 are Brent Webster and Scott Walker. Mr. Webster was the only candidate in that race that attended the forum. Judge Wheless Spoke First followed by Judge Keel who was then followed by Mr. Webster. All the candidates spoke of their attributes that they felt made them the best qualified for the position and fielded a few questions.

For those unfamiliar with the Court of Criminal Appeals here is a quick definition of it taken from Wikipedia:

The Court of Criminal Appeals exercises discretionary review over criminal cases, which means that it may choose whether or not to review a case. The only cases that the Court must hear are those involving the sentencing of capital punishment or the denial of bail.

After the candidates for Criminal Appeals Court were finished speaking and taking questions, a ten-minute recess was taken to give the candidates time to meet the crowd and field questions directly. Each candidate had to either return home or go on to another meet and greet. Once this was finished the candidates for the runoff election for Austin County Commissioner Precinct 1 took the stage. Reese Turner was first up to give his opening statement followed by Mark Lamp. Both men received and answered questions concerning the job of commissioner and what they felt they had to bring to the job.

The candidate forum is below in two parts. The videos were split between the Court of Criminal Appeals Candidates and the Candidates for Precinct 1. Each video is labeled appropriately for you to view that section of the forum in its entirety. We hope that you will take the time to watch the videos and educate yourselves on the candidates so that you may vote for the candidate that you feel can best serve the county as well as Texas. Remember, early voting is May 16 – 20 and election day is May 24.