As we warned back in June in “‘Look Out Below’: Why The Economy Is About To Fly Off A Fiscal Cliff“, and again last week in “Failure To Launch New Fiscal Stimulus Would Have Catastrophic Consequences For The US Economy“, the US consumer – having grown accustomed to the $600 in weekly Federal Pandemic Unemployment Compensation (FPUC) which however expired at the end of July – is suddenly running on fumes, which will only get worse if there is no Fifth fiscal stimulus deal struck by Dec 31, when two more anchor stimulus pillars – the Pandemic Emergency Unemployment Compensation (PEUC) and Pandemic Unemployment Assistance (PUA) – also expire.

So far the US economy has not suffered a consumption hit in the two months following the fiscal cliff, with personal spending in September once again surprising to the upside, which in turn is likely preventing Congress from reaching a deal, especially with stocks not too far from all time highs.

Indeed, as we noted earlier, and as Morgan Stanley’s Ellen Zentner wrote subsequently, nominal personal income growth in August was reported just below consensus expectations, declining by 2.7% (vs. consensus at -2.5%), with July upwardly revised by 10bp to +0.5%M. Real disposable personal income fell 3.5%M in August as well. The decrease in income was largely due to the end of the $600/week supplemental unemployment insurance benefits, which we first warned about back in June. Partially offsetting this decline was further improvement in the labor market in August, lifting wage and salary income by 1.3%M for the second consecutive month.

Meanwhile, personal spending came in above consensus expectations, rising 1.0%M (vs. consensus at 0.8%M), with July downwardly revised by 40bp to 1.5%M. Spending was driven by a 1.4%M increase in services spending, while durable goods spending rose by 0.9%M and spending on nondurable goods declined by 0.1%M. 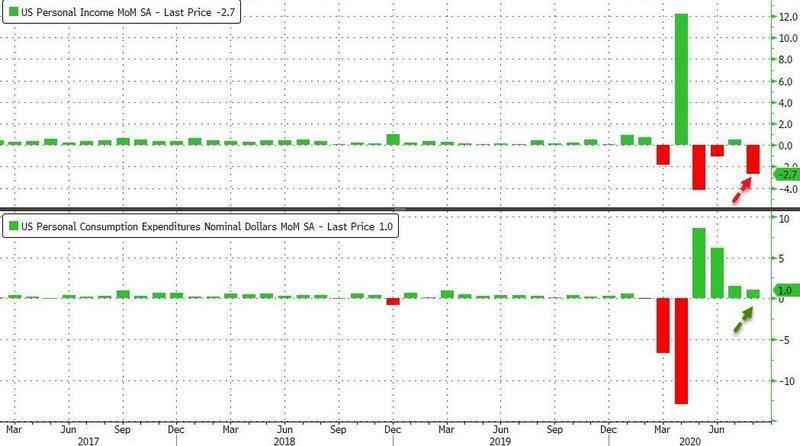 And here lies the problem: lower income coupled higher spending in a time when the vast majority of Americans were looking forward to more stimulus meant that US consumer rapidly burned through savings. According to the BEA, in August, the amount of annualized savings tumbled by $723 billion to $2.435 trillion, the lowest since March and far below the $6.4 trillion peak in annualized personal savings hit in April. 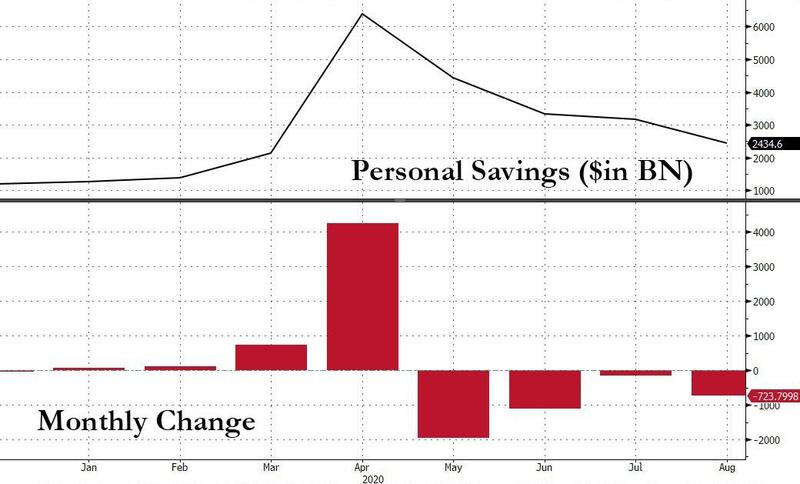 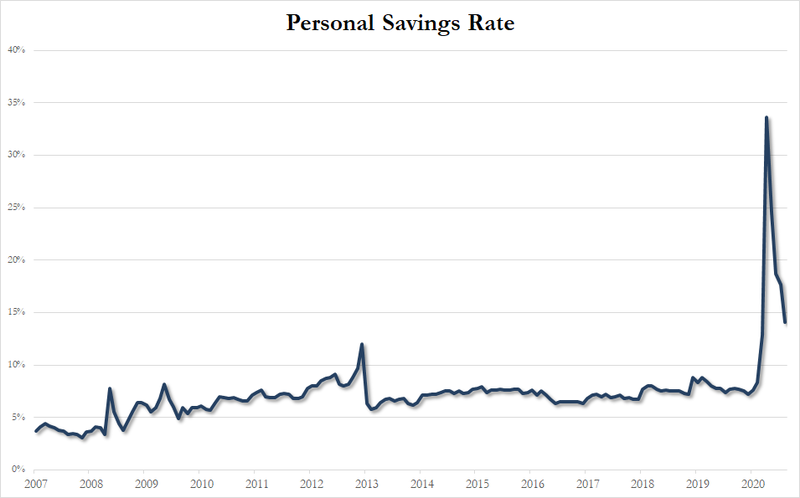 So as Congress continues to debate and pretend that a new fiscal stimulus bill is just over the corner, the massive savings buffer that was built up in the aftermath of the covid crisis, and which funded much of personal consumer spending in the past two months is now shrinking fast and at this rate personal savings will be back to pre-covid levels in 2-3 month at the most. At that point it is safe to say that unless a new fiscal deal is in place, US consumption will crater unless somehow the millions of unemployed workers who still desperately rely on government stimulus find a job (spoiler alert: they won’t).

This article appeared at ZeroHedge.com at:  https://www.zerohedge.com/markets/americans-burn-through-staggering-724bn-annualized-savings-august-stimulus-fades