Debt among American farmers has increased to $409 billion, Agriculture Secretary Sonny Perdue warned Wednesday. That is up from $385 billion last year and is currently at levels not seen since the agricultural recession (farm crisis) of the 1980s, reported Reuters.

“Farm debt has been rising more rapidly over the last five years, increasing by 30% since 2013 – up from $315 billion to $409 billion, according to USDA data, and up from $385 billion in just the last year – to levels seen in the 1980s,” Perdue said in his testimony to the House Agriculture Committee.

“But those average values mask areas of greater vulnerability,” he added.

“As producers are not able to cover year to year expenses with operating loans, they are forced into transforming operating loans into term debt which erodes their creditworthiness,” said Luis Ribera, an agricultural economist at Texas A&M University.

“On top of all that then we have the trade war which reduces the demand of US commodities given that tariffs make them more expensive and then depress the prices even more.”

US Department of Agriculture chief economist Robert Johansson said farm exports are expected to drop by as much as $1.9 billion this year, citing the deepening trade war.

China has been a significant buyer of corn, soybeans and other agricultural commodities for at least three decades, but since President Trump launched protectionist policies, Beijing responded by imposing tariffs on American agriculture products which caused trade between both countries to decline. While Beijing has promised to buy hundreds of billions of dollars in agricultural items, it has offered little relief to soybean farmers who are teetering on bankruptcy even with President Trump’s farm bailout money in hand. But as recent trade negotiations might result in an upcoming lasting agreement, it might not be enough to save hundreds of heavily indebted American farms from sliding into bankruptcy. 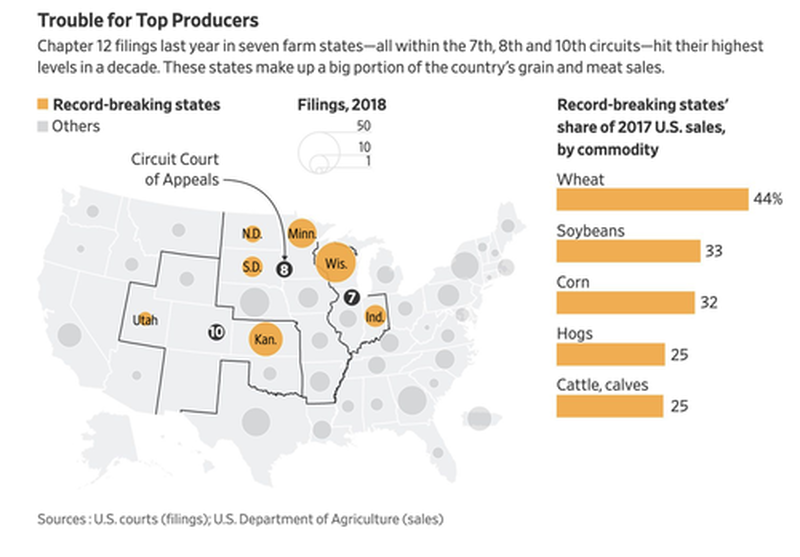 The number of farmers filing for bankruptcy has soared to its highest level in a decade. And with high levels of debt, bankruptcies are expected to rise into the 2020s.

Perdue said land values have helped some farmers maintain a low debt-to-asset ratio of 13.5%. However, in the next recession, land values are expected to dip, which could trigger a deleveraging period for farmers on par with the 1980s farm crisis.

This article appeared at ZeroHedge.com at:  https://www.zerohedge.com/news/2019-03-01/american-farm-debt-reaches-1980s-farm-crisis-levels-agriculture-secretary