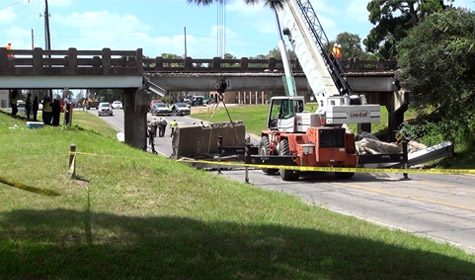 The information we have so far is only what we were able to gather from filming at the accident site.  This afternoon an 18 wheeler hit the Hwy 90 Bridge that crosses over Hwy 36 in Sealy, TX.  It is unclear how the truck hit the bridge but, the dump truck’s bed was raised and in contact with the bridge at the time of our filming.  (You can see this in the video.)  Part of the bridge broke off and hit a white Chevrolet car killing an individual in the vehicle.  We are unclear as to how many occupants were in the vehicle but, we were told that there was only one fatality.  We will update and clarify this story as more information becomes available and as law enforcement releases information to the press.

On 07/07/2016 at approximately 10:00am a truck owned by Texas Disposal Systems and driven by Carl Weige (72 years of age) struck the Hwy 90 overpass while traveling south on Hwy 36 in Sealy Texas.

As a result of striking the overpass a large portion of the bridge collapsed and fell on top of a car driving north on Hwy 36.

The vehicle struck by the falling debris was a 2013 Chevy Malibu driven by Leah Bullock 35 years old. Leah Bullock sustained serious but non-life threatening injuries and was transported by Life Flight to Memorial Hermann Katy Hospital for treatment.

The front passenger, Brien Bullock 12 year old, was also struck by falling debris and was pronounced deceased at the scene by Austin County JP 3 Cheryl Kollatschny.

A back seat passenger, Breanbon Gardner 9 years old, was uninjured.

The Hwy 90 overpass sustained serious damage and will remain closed until it can be determined structurally sound. Traffic on Hwy 36 will be rerouted until a determination on bridge repairs are made.

We have reports that the affected vehicle was one of three on their way to College Station for a sporting event when the tragic accident happened.