The Knights traveled to Temple, TX to face the Cen-Tex Chargers on Friday night. It was a very tough, physical, hard-fought game. It came down to the last play on 4th down with 13 seconds left, and the Knights coming up short 58-50.

The offense moved the ball better than any game this year. Junior, Kaleb Shepherd, led the rushing attack with 164 yards on 16 carries, and 5 TDs. Freshman QB, Noah Figueroa, added 258 yards passing going 17/27, with 2 TDs and 2 INT. 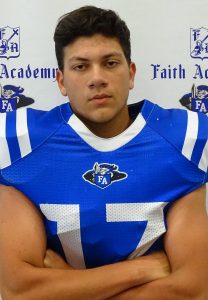 Older brother Nathan Figueroa, had over 120 receiving and 2Tds, including one long, 60 yarder, that tied it up late in the game. He also led the team in tackles with 11 and added 2 INT on defense. Phenomenal blocking on the line was led by Junior Center, Neil Johnston, who also added his first catch of the year for 14 yards. Also on the line was Junior, Big Landon Snyder, and Junior, Caden Swierkowski. The Offensive line never allowed a sack or tackle for loss. The hard work they have put in is paying off and it’s showing by the number of points the Knights are putting up. Having a break out game on both sides of the ball, was Junior, Maury Cano. He added a rushing TD for the Knights, as well as, having 6 tackles and a pass breakup, on defense. Great defensive efforts by other Knights as well resulted in the close game. Solo Senior, Josh Poorman, added 6 tackles, as well as 1 sack and 1 tackle for a big loss. Junior, Dustin Rodgers, added his first 2 tackles on the year, making great tackles on the kickoff team.

The player of the week is going to Nathan Figueroa. The 6’4” 220 lbs Junior, had a huge game on both sides of the ball. He had over 120 yards receiving and 2 TDs, one receiving and one rushing. Defensively, he had 11 tackles, 2 pass knockdowns, and 2 INTs. Figueroa’s  leadership on the field, kept the Knights calm and in the game, during some intense moments. Cool, calm, and collected was just what the Knights needed during the hard-fought battle. Great game Nate.