Why Supreme Court Opinions Are NOT Law 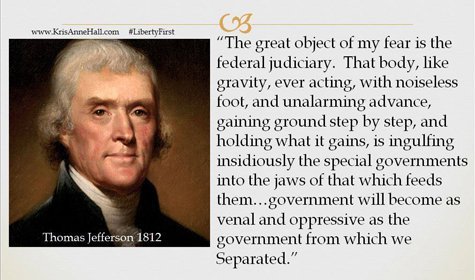 We have come to accept the Supreme Court’s “Opinions” as if they are law on the books to be followed.  But, it is important for us to remember, the Supreme Court decisions are NOT law, they are NOT supreme over the States, and all Supreme Court Opinions are completely limited by the Constitution.

“The powers not delegated to the federal government…are reserved to the States respectively, or to the people.” ~ Tenth Amendment

“…the Laws of the United States which shall be made in Pursuance thereof; …shall be the supreme Law of the Land.” ~ Article 6 sec 2, U.S. Constitution

“No law, therefore, contrary to the Constitution can be valid.”

This drafter’s explanation of Article 6 section 2 proves that any law made by Congress that is inconsistent with the Constitution, in this case outside delegated power, is an invalid law, not binding upon the States.

“All legislative Powers herein granted shall be vested in a Congress of the United States,” ~ U.S. Constitution

Supreme Court Opinions CANNOT be law of the land.  The writing of law is a power exclusively held by Congress. Court Opinions cannot be law without violating the express limits of the separation of powers established by the Constitution. A violation of this separation of powers is a per se violation of the Constitution which renders the court opinion invalid (see #2).

Violations of separation of power were of the utmost concern to the drafters of the Constitution. James Madison explains, quoting Montesquieu, Spirit of Laws (1748), in Federalist #47:

Montesquieu, Spirit of Laws, warns of the consequences of allowing the judiciary to violate separation of powers to be violated:

“The judicial Power shall extend to all Cases, in Law and Equity, arising under this Constitution, the Laws of the United States, and Treaties made, or which shall be made, under their Authority;” ~ Article 3 sec 2 clause 1, U.S. Constitution

The power of the Supreme Court is limited to matters “arising under this Constitution, the Laws of the United States, and Treaties” made “under their Authority.” If a power is not specifically delegated it is not a matter over which the Supreme Court has jurisdiction. Therefore Supreme Court Opinions regarding State land, Environment, Education, Firearms, etc… are not binding upon the States. To claim otherwise violates both the Tenth Amendment and Article 6 section 2 of the Constitution.

James Madison explains the limitation of the power of the Judiciary in his Virginia Assembly Report of 1800:

“If the decision of the judiciary be raised above the authority of the sovereign parties to the Constitution [States]… dangerous powers, not delegated, may not only be usurped and executed by the other departments, but that the judicial department, also, may exercise or sanction dangerous powers beyond the grant of the Constitution…consequently, that the ultimate right of the parties to the Constitution, to judge whether the compact has been dangerously violated, must extend to violations by one delegated authority as well as by another–by the judiciary as well as by the executive, or the legislature.”

“The great object of my fear is the federal judiciary. That body, like
gravity, ever acting, with noiseless foot, and unalarming advance,
gaining ground step by step, and holding what it gains, is ingulfing
insidiously the special governments into the jaws of that which feeds them…government will become as venal and oppressive as the government from which we Separated.”

KrisAnne Hall is an attorney and former prosecutor, fired after teaching the Constitution to TEA Party groups – she would not sacrifice liberty for a paycheck. She is a disabled veteran of the US Army, a Russian linguist, a mother, a pastor’s wife and a patriot. She now travels the country and teaches the Constitution and the history that gave us our founding documents. KrisAnne Hall does not just teach the Constitution, she lays the foundations that show how reliable and relevant our founding documents are today. She presents the “genealogy” of the Constitution– the 700 year history and five foundational documents that are the very Roots of American Liberty.

Both Have Deep Texas Roots, But Sid Miller And Susan Hays Offer Stark Contrast In Fight For Ag Commissioner