Where China Goes To Outsource Its Own Soaring Labor Costs 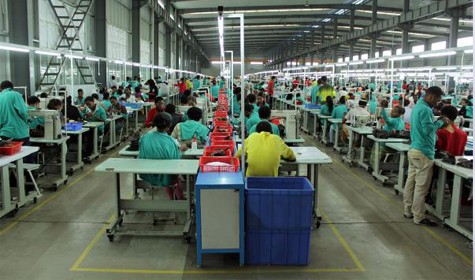 30 years ago, the great outsourcing wave took millions of US low-skilled jobs and planted them right in the heart of China, which was about to undergo the fastest industrialization-commercialization-financialization experiment in history. $26 trillion in bank assets later, the world’s biggest housing bubble, and a teetering financial system that every day depends on Beijing making the correct central-planning decision (of kicking the can one more day, of course) or else the biggest financial collapse in history will take place, all lubricated by years of inflation in everything and most certainly wages, and suddenly outsourcing jobs in China is not all that attractive.  In fact, it has gotten so bad that China itself is now forced to outsource its own labor to cheaper offshore markets. Such as this one.

Ethiopian workers strolling through the parking lot of Huajian Shoes’ factory outside Addis Ababa last month chose the wrong day to leave their shirts untucked. Company President Zhang Huarong, just arrived on a visit from China, spotted them through the window, sprang up and ran outside. The former People’s Liberation Army soldier harangued them loudly in Chinese, tugging at one man’s aqua polo shirt and forcing another’s shirt into his pants. Nonplussed, the workers stood silently until the eruption subsided.

Shaping up a handful of employees is one small part of Zhang’s quest to profit from Huajian’s factory wages of about $40 a month -– less than 10 percent the level in China.

“Ethiopia is exactly like China 30 years ago,” said Zhang, 55, who quit the military in 1982 to make shoes from his home in Jiangxi province with three sewing machines and now supplies such brands as Nine West and Guess?. “The poor transportation infrastructure, lots of jobless people.”

Reading the linked Bloomberg article, it becomes quite clear that it is not at all surprising that China has picked Ethiopia as its place to outsource labor: while 30 years ago the Chinese leveraged dragon was only just starting to stir, then-Marxist Ethiopia which back was considered one of the poorest countries in Africa if not the world, was in the midst of a great famine. And while things in China have changed drastically since the 1980s, in Ethiopia, and most other African countries, time has stood still, at least when it comes to wages. Which means that having effectively colonized Africa in the past 4 years, as we showed in 2012 with “The Beijing Conference”: See How China Quietly Took Over Africa, while the west was busy kicking its own can, bailing each other out and pretending its economy is solvent, China was busy setting up shop across all African nations with plans to do just what Zhang does now: hire an ultra cheap labor force now that China itself is becoming uncompetitive in the global labor landscape.

A combination of cheap labor and electricity and a government striving to attract foreign investment makes Ethiopia more attractive than many other African nations, said Deborah Brautigam, author of “The Dragon’s Gift: The Real Story of China in Africa” and a professor of international development and comparative politics at Johns Hopkins University’s School of Advanced International Studies in Washington.

“They are trying to establish conditions for transformation,” Brautigam said in a telephone interview. “It could become the China of Africa.”

Huajian’s 3,500 workers in Ethiopia produced 2 million pairs of shoes last year. Located in one of the country’s first government-supported industrial zones, the factory began operating in January 2012, only three months after Zhang decided to invest. It became profitable in its first year and now earns $100,000 to $200,000 a month, he said, calling it an insufficient return that will rise as workers become better trained.

China, Africa and global retailers all have stakes in whether Ethiopia and such countries as Tanzania, Rwanda and Senegal become viable production bases for labor-intensive products. Promoting trade, boosting employment and spurring investment are among the topics that will be discussed on August 4-6 at the first White House U.S.-Africa Leaders Summit in Washington.

China may not have hit its second, urban Lewis point yet, but if Ethopia is any indication, labor conditions for the country that needs to create tens of millions of new jobs every year to preserve social stability may get complicated very fast.

African nations have a compelling opportunity to seize a share of the about 80 million jobs that China will export as its manufacturers lose competitiveness, according to Justin Lin, a former World Bank chief economist who now is a professor of economics at Peking University.

Here, instead of alienating the potential labor pool, China is keeping its options very open, and in fact welcomes the ability to outsource to a cheaper location: “Chinese Premier Li Keqiang and Ethiopian Prime Minister Hailemariam Desalegn, who met on May 4, backed the move of Chinese industries to Ethiopia. China is “supporting Ethiopia’s great vision to become Africa’s manufacturing powerhouse,” Hailemariam told reporters at a joint press conference in Addis Ababa.”

At the very bottom of it all: surging labor prices. Yes, in China.

While China’s inland regions offered manufacturers a cheaper alternative to the export-linked coastal areas, rising costs and a limited pool of available workers now are undermining that appeal.

Average factory pay in Henan, about 800 kilometers from the coast, rose 103 percent in the five years ended in September and 80 percent in Chongqing, 1,700 kilometers up the Yangtze River. In the same period, salaries rose 82.5 percent in Guangdong, where Huajian has its base in the city of Dongguan.

Cost inflation in countries including China has prompted Hennes & Mauritz AB, Europe’s second-biggest clothing retailer, to work with three suppliers in Ethiopia. The nation has “great potential” for production, H&M head of sustainability Helma Helmersson said in an April interview.

China is not the only one to have discovered what may be the world’s last outsourcing diamond in the rough.

Signs of Ethiopia’s allure include factories outside Addis Ababa set up by leather goods maker Pittards Plc of the U.K. and Turkish textile manufacturer Ayka Tekstil. Foreign direct investment in the nation surged almost 250 percent to $953 million last year from the year before, according to estimates by the United Nations Conference on Trade and Development.

But only China brings with it a certain “flare” to the work ethic it is trying to inculcate within the local population:

Zhang spends about half his time in Ethiopia, he says. During the visit last month, he spoke to about 200 uniformed Huajian supervisors, a mix of Ethiopians and Chinese, gathered in the parking lot. A giant plasma screen mirrored the crowd as Zhang hurried onto the stage.  He berated those assembled for a lack of efficiency, then praised them for their loyalty to Huajian, his words translated into Amharic and Oromo. He ordered them to march on the spot, to turn left and to turn right, all chanting together in Chinese.

“One two one,” they chanted. “One two three four,” as they marched in step. Slogans followed: “Unite as one.” “Improvement together.” “Civilized and efficient.”

They sang the “Song of Huajian,” whose words urged “We Huajian people” to bravely move forward, to hold the banner of Huajian high and to “keep our business forever.” Chinese supervisors led the song, their Ethiopian colleagues stumbling over some words and struggling to keep up.

Later, Zhang explained that he can’t be as tough on the staff as he would like. “Here the management cannot be too strong as there will be a problem with the culture,” he said via a translator. “In China you can be strong, but not here. The conditions here mean we have to show respect. On one hand we have to have strict requirements; on the other hand we have to take care of them. They have their own dignity. They may be poor but we have to respect their dignity.”

Taddelech Teshome, 24, said her day starts at 7:20 a.m. after her Chinese employers provide employees with a breakfast of bread and tea. When her morning shift ferrying shoes from the factory floor to the warehouse is over, she gets fed the national staple, sour bread, for lunch. After work, a Huajian bus takes her to nearby Debre Zeit, a town where she rents a room with her sister for $18 a month.

She came to Huajian just over a year ago from her home 165 kilometers away in Arsi region after her sister started at the factory.

“The work is good because I pay my rent and I can look after myself,” she said, wearing an aqua Huajian polo shirt. “It’s transformed my life.” Taddelech said she wants to work for two more years at the plant and become a supervisor. She eventually aspires to build her own house.

With inflation at 8 percent — down from 40 percent in July 2011 -– saving cash is tough. Mohammed al-Jaber, who earns $30 a month for gluing shoe linings eight hours a day six days a week, said he can add to his pay with perfect attendance each month — a $7.50 bonus — and overtime. Any extra gets sent home to his family in the Arsi region.

As for higher level arrangements, the two countries are certain to get along: One appeal for China: Ethiopia follows a similar tightly controlled, state-heavy economic model. Opposition parties won only one out of 547 parliamentary seats at the last election in 2010. Ties are strong between the Communist Party of China and the Ethiopian Peoples’ Revolutionary Democratic Front: On July 10, Central Committee Political Bureau member Guo Jinlong visited Ethiopia and met with Prime Minister Hailemariam. The two pledged to enhance cooperation, the official Xinhua news agency said.

Meanwhile, China is doing what the west was so efficient in its heyday: providing all the loans to fund this international expansion:

The Chinese and Ethiopian governments also are investing in hydroelectric plants — including what will be Africa’s largest, the domestically funded Grand Ethiopian Renaissance Dam on the Blue Nile — that should increase Ethiopia’s power supply five-fold by 2020.

That may help overcome obstacles including the supply of electricity and cumbersome customs and tax procedures. In May, a World Bank team went to visit a textile factory in the Eastern Industrial Zone, where the Huajian plant is located, and found they are faced with daily power outages lasting for hours, Ethiopia country director Guang Zhe Chen said.

Perhaps the biggest shocker here is that while China was colonizing Africa, first with infrastructure, then with debt, and now with local labor, neither JPM nor Goldman did the same. Perhaps the US truly is losing it to China which managed in a decade to take over the continent without firing a single shot (the US does have a few drone bases in central Africa but they won’t last). And even if the “west” tries to steal Africa from under China’s nose, it is far too late  now.

Rising Chinese wages that Zhang calls “an inevitable trend” are pushing Huajian to try to increase its workforce in Ethiopia to as many as 50,000 within eight years.  A model of a planned new plant at the edge of Addis Ababa is displayed at the factory. The 126-hectare (341-acre) complex, partly financed by more than $300 million from Huajian, will include apartments for workers, a “forest resort” district and a technical university.

At the gathering in the parking lot, after supervisors sang Huajian’s company song, Zhang dismissed the Ethiopian contingent. Then he continued haranguing the Chinese managers. To make his point that structure was needed to keep employees in focus, he thrust a broomstick toward them repeatedly, then toward the remote camera that was feeding to the plasma screen, the image blurring with each prod.

Then he left the stage, laughing and raising a triumphant fist.