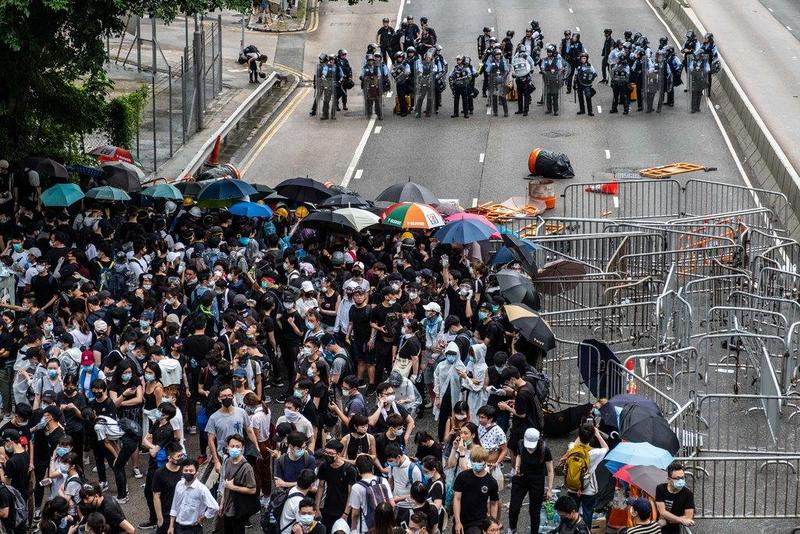 Two days after over 1 million people protested in the streets of Hong Kong – unsuccessfully – against a proposed extradition bill that would allow Beijing to take people from Hong Kong to stand trial in mainland China on Wednesday morning in a fresh display of defiance against the contentious extradition bill, thousands of protesters started barricading roads and began stopping traffic from accessing the HK legislature on Wednesday morning, as the government’s proposal returns to a full council meeting.

According to the SCMP, crowds of predominantly young people, some dressed in black and wearing face masks, dragged metal barriers and linked arms, closing off roads surrounding the government building.The protesters had arrived as early as Tuesday night, with some clashing verbally with police over the force’s heavy presence.

Many have skipped work or class to join, in response to numerous online calls for strikes. While the police has refused to engage so far, there were occasional reports of police using pepper spray on some protesters. Meanwhile, the numbers of protesters are expected to grow during the day after some unions called for a strike Wednesday.

Hong Kong at 10:15 a.m., June 12, 2019. Protestors have, once again, overwhelmed a key road in the center of the city as part of protests against a proposed extradition law. pic.twitter.com/uLdARIBdIz

Civic groups and organizations mobilized Tuesday, adding to small businesses and groups who called for a general strike and a school boycott to “defend Hong Kong.”

Late Tuesday, the government restricted access to its headquarters, which also houses the legislature. Local media reported that police were planning to deploy 5,000 officers in response to expected protests. Police declined to comment on the figure.

Police claimed they have intel of bricks being transported to Legco vicinity and urged protesters to leave. Protesters are joined by DP chairman Wu Chi-wai #extraditionbill #LegCo pic.twitter.com/OyFkhlxSkp

As reported previously, lawmakers are due to begin debating the bill so that a vote can be held by the evening of June 20. In an unusual move Tuesday, Andrew Leung, president of Hong Kong’s mostly pro-government legislature, scheduled extra sessions for the bill to proceed more quickly than usual to a vote. Meanwhile, revealing how China has already stripped the city of its democracy, opposition lawmakers are unable to block the bill because they lost their veto power after authorities ousted several democratically elected lawmakers through court orders and barred others from running.

On Monday, following Sunday’s massive protests, city’s leader, Carrie Lam said she would quickly press ahead with the bill. The government has already bypassed the usual scrutiny of the new legislation by a committee of lawmakers. Amid mounting pressure and death threats, Lam has insisted that the legislation is needed to plug legal loopholes and prevent Hong Kong from becoming a haven for fugitives.

The proposed amendments include a mechanism for extraditions to mainland China, triggering fears in Hong Kong that Beijing could detain people in Hong Kong and try them across the border under its more opaque legal system. Mounting opposition has stirred from all corners of society, including businesspeople, lawyers and activists, who say the bill would undermine Hong Kong’s relative autonomy and independent judicial system.

Legco under siege already at 8am — the view from our office pic.twitter.com/vGtf82Wy3s

The U.S. on Monday expressed concern that the bill, if passed, “could damage Hong Kong’s business environment and subject American citizens residing in or visiting Hong Kong to China’s capricious judicial system.” The U.S. shares the concerns of many in Hong Kong over the lack of protections for people in the proposed law, said State Department spokeswoman Morgan Ortagus.

Legco under siege already at 8am — the view from our office pic.twitter.com/vGtf82Wy3s

In addition to the protest, a social workers union has called for a strike, with Hong Kong’s largest teachers group, which has 100,000 members, encouraging teachers to gather outside government headquarters—which also houses the legislature—and urged schools to be lenient with those who skipped classes to protest.

“We are extremely angry,” said Fung Wai-wah, president of the Hong Kong Professional Teachers’ Union, who called Lam arrogant for pushing ahead. “She ignores the people’s voices as if they are dirt and muck.” Naturally, the city’s Education Bureau said the calls for a school boycott were “extremely irresponsible.”

Just as predictable, Beijing has backed Lam, with officials telling state media that foreign powers had colluded with local dissidents to cause unrest, straight out of Maduro’s playbook. According to the WSJ, the government is taking precautions to contain future protests after Sunday’s march—which had been largely peaceful—turned violent overnight with some protesters clashing with police.

This article appeared at ZeroHedge.com at:  https://www.zerohedge.com/news/2019-06-11/we-are-extremely-angry-thousands-protesters-block-hong-kong-roads-protest-against