Watch: Bill Gates Says Lockdowns Should Carry On Into 2022 [VIDEO] 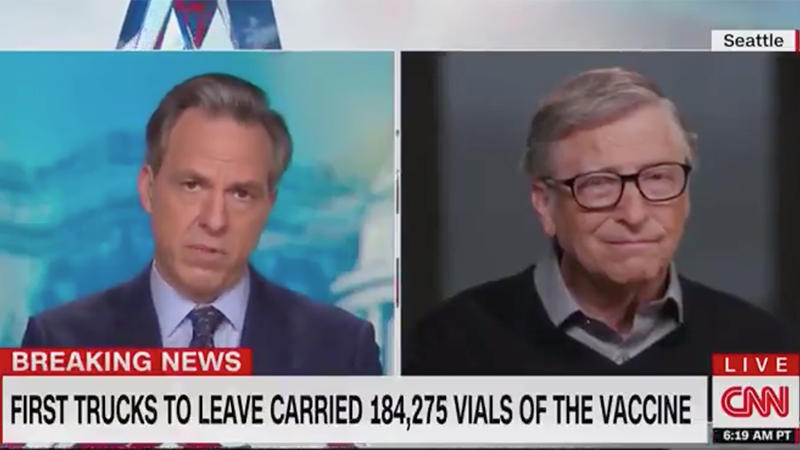 Billionaire vaccine pusher Bill Gates wants local businesses and services to remain closed, with lockdowns, masks and social distancing continuing throughout all of next year and into 2022.

Gates made the declaration in an interview with CNN Sunday.

Bill Gates says lockdowns should continue well into 2022, with bars and restaurants shut down for the next six months. Reject this tyrant. pic.twitter.com/2AWaeEuRAd

Gates proclaimed that “Unless we help other countries get rid of this disease” and until there are “high vaccination rates” among Americans, the “risk of reintroduction” will remain.

.@BillGates on Covid: "Even through 2022” we should be prepared for life to not return to “normal”

Says “sadly" it’s "appropriate” for bars and restaurants to close over the next "four to six months" pic.twitter.com/cmDD8pv3XR

Gates declared that “Big public gatherings” should remain banned, with the majority of most bars, clubs, and restaurants being “sadly” closed.

Gates said that there can only be a return to ‘normal’ after another 12 to 18 months, and only “if we manage it well.”

Unless Bill Gates is willing to give his entire fortune away to people who work in the bar and restaurant industry, his opinion is worthless https://t.co/y7M6pS6VS5

Gates also used the opportunity to take a swipe at President Trump, saying that his unwillingness to concede the election is somehow “complicating” the distribution of vaccines.

“The transition is complicating [things,] but the new administration is willing to rely on actual experts and not attack those experts,” Gates said, without explaining what ‘experts’ Trump is attacking or how the vaccine that the President helped to fast track, and is now ready to roll out, is being held back.

Bill Gates is not a doctor, not even a Jill Biden doctor.

Gates previously declared that the world won’t return to normal until “a lot of people” take a second “super-effective” coronavirus vaccine that could be years away.

In October, Gates forcast that a “best case scenario” for a return to normal would be the end of 2021, a date that was qualified with the proviso, “We still don’t know whether these vaccines will succeed.”

The billionaire has also suggested that governments need to ‘brainstorm’ ways of “reducing vaccine hesitancy,” in the face of anti-vaccine “conspiracy theories”.

In November, Gates met with the CEOs of ten of the world’s biggest pharmaceutical companies to foment plans to roll out the coronavirus vaccine globally.

This article appeared at ZeroHedge.com at:  https://www.zerohedge.com/medical/watch-bill-gates-says-lockdowns-should-carry-2022