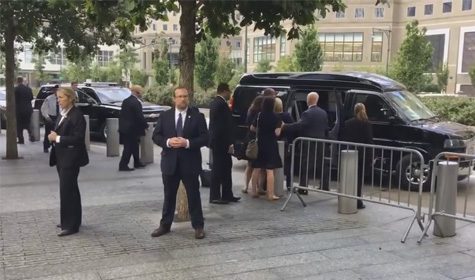 Update 2: It appears the next plan from the Clinton Campaign is to remove all evidence that it ever happened…

The AP has deleted a tweet of video of Hillary Clinton after the 9/11 memorial ceremony as we no longer have distribution rights.

Update: The following clips show the moment of Hillary’s “medical episode” resulting from the “blistering” 79 degree heat in Manhattan.

An even better video, capturing the incident in its entirety from a different, more exposing angle, emerged moments ago, Here is the best video of the incident, yet:

Sick Hillary is trailed by her hypnotist/handler while a nurse monitors her pulse. #ClintonCollapse pic.twitter.com/nRIEJBR7wa

If it were Trump’s shoe left at curbside because of health issues it would no doubt be on WaPo’s & NYT’s front page. pic.twitter.com/rULGeQPIgJ

Meanwhile, Hillary emerges from Chelsea’s apartment to declare: “It’s a beautiful day in New York!”…which seems to slightly contradict to her official statement issued earlier that she “overheated.”

.@HillaryClinton will cancel West Coast swing scheduled for Monday and Tuesday, spokesman says, as she recovers.

For those who missed it, earlier today, Hillary Clinton collapsed and appeared to faint on her way to her campaign van on Sunday as she became “overheated” and had to leave early from a September 11 memorial ceremony in New York City. Clinton, 68, was taken to her daughter Chelsea’s home in Manhattan, and emerged a few hours later wearing sunglasses and telling reporters that she was “feeling great.”

Clinton went, as previously planned, to her home in Chappaqua, New York, 30 miles (50 km) north of New York City. Clinton left the memorial event after about 90 minutes while it was still underway, Nick Merrill, a Clinton spokesman, said. “During the ceremony, she felt overheated so departed to go to her daughter’s apartment, and is feeling much better,” Merrill said in a statement. As the event began on Sunday at the site of the World Trade Center that was attacked by two hijacked airliners 15 years ago, there was patchy sunlight, with temperatures at about 80 degrees Fahrenheit (26.6 Celsius).

Video taken at the scene and posted on social media shows Clinton being held up by three people. She staggers and appears to trip on a curb as they help her into a vehicle. Clinton’s departure from the event was not witnessed by the reporters who travel with her campaign, which did not offer any information about why she left and her whereabouts for more than an hour.
* * *

While we have yet to receive any confirmation from a second source – so take this report with a big grain of salt – moments ago Fox News senior correspondent Rick Leventhal, citing an anonymous law enforcement official as a source, reported that Hillary Clinton who was present at the Sept 11 ceremony in downtown Manhattan, suffered a “medical episode” when she stumbled and nearly fell after her knees buckled, and was then ushered into a van, in the process losing a shoe, as she was rushed away from ground zero in an early departure.

As Fox News reports, the Democratic presidential nominee appeared to faint on her way into her van and had to be helped by her security, the source said. She was “clearly having some type of medical episode.” Clinton’s stumbled off the curb, her “knees buckled” and she lost a shoe as she was helped into a van during her “unexpected early departure,” a witness told Fox News. A separate law enforcement source told Fox News that Clinton left the event because she wasn’t feeling well

MORE ON #HILLARY per witness: “unexpected early departure”; she stumbled off curb, “knees buckled”, lost a shoe as she was helped into van

press pool is being kept in dark about HRC’s whereabouts & campaign isn’t responding to reqs for confirmation https://t.co/Le0UhKGUtu

There has been no official statement from the Clinton campaign yet.

Thanks to ABC and NBC we do know that Clinton left the Sept 11 ceremony about 45 minutes ago when the “medical incident”is said to have happened, however the press has not been told where, while aides are not responding to questions about her whereabouts.

Clinton left the 9/11 ceremony 30+ mins ago but press pool was not told to where. Aides now not responding to any Qs about her whereabouts

CBS News reports the media is not being told of Clinton’s whereabouts https://t.co/zGTwYjZnko

From NBC Clinton pool report: “We are being kept completely in the dark.”

This article appeared at ZeroHedge.com at:  http://www.zerohedge.com/news/2016-09-11/hillary-clinton-reportedly-suffers-medial-episode-rushed-away-ground-zero-fox-news