The US Economic Recovery Is Still On Food Stamps 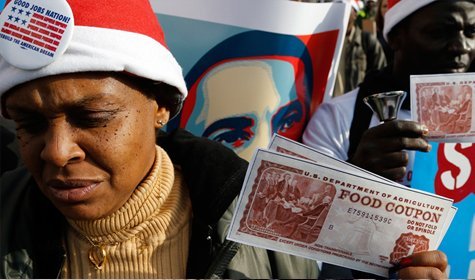 Something peculiar is happening to our nation’s food assistance program. The recently renamed food stamp program – now called the Supplemental Nutrition Assistance Program or SNAP – is supposed to respond to difficult economic conditions by providing financial assistance to purchase food to poor Americans. As bad times hit and more people need assistance, SNAP caseloads should go up. And as the economy strengthens, the number of SNAP recipients should decline – at least in theory.

If we compare the current recovery with the recovery after the recession of the 1980s, whose duration and unemployment levels are most comparable, the change in SNAP’s responsiveness becomes clear. Adjusting for population, in the four years following the 1981-1982 recession, there was a 12.5 percent decline in SNAP recipients. In the four years following the 2007-2009 recession, SNAP recipients increased by 15.6 percent. If this recent recovery had behaved like that of the 1980s, by 2013 only 11.5 percent of the population would have been receiving SNAP benefits: 36 million individuals as opposed to 47.6 million. That’s a big difference.

Why is the number of SNAP recipients staying near record highs even as the economy strengthens? A common answer is that the economy is still very weak. And there may be some truth to that, but it can’t explain the whole difference because the unemployment rate has dropped too far — indicating that jobs are much more available. Or perhaps the jobs which are coming back don’t pay enough to allow many workers to earn enough to no longer be eligible for SNAP benefits? For some time now, many social services leaders including myself have promoted SNAP benefits as a “work support” which can help shore up low wages or limited hours for families with at least one adult worker.

But even that explanation isn’t entirely sufficient for one very important reason – a lot of SNAP recipients, who could be working at least a little, aren’t. Government data show that as many as 10 million working age adults are getting SNAP and reporting no income from earnings. A program can’t be a “work support” if the recipients aren’t working.

Or are they? My experience and many studies of low-income communities suggest that at least some of the SNAP recipients who report no earnings have earnings which they receive off the books.

Then there is the Casey Mulligan effect, named that after the University of Chicago economist who has shown that various safety net programs – absent a work requirement – are allowing people to stay out of work longer than they otherwise would if no benefits were available. In the past, I have been skeptical of this position when it is directed at SNAP benefits alone. It is difficult to see how a voucher for food with an average household benefit of less than $230 per month could provide enough aid to make someone decline looking for work. But if that benefit is combined with other benefits — such as housing assistance, Medicaid or Unemployment Insurance benefits — it is then possible, even predictable, that this layering of programs may lead some to decide that full time, on-the-books employment is not worth the effort.

To some, this is a positive outcome. Layered safety net programs, taken together, provide a minimum level of income that may free families from taking jobs they would rather not have. But there are at least three problems with that position. First, one of the contributors to the slow recovery is a declining labor force participation – the economy won’t grow as fast as we would like if people are increasingly disconnected from it. Second, many studies have shown that having adults in full time work is positive for families in myriad ways beyond the increased income work provides. Third, and most important, families which rely on benefits and not work are almost always still poor and have little chance of moving up.

Last month the Food and Nutrition Service, the federal agency responsible for SNAP, offered states the opportunity to propose alternative ways of engaging food stamp recipients in work or work programs. This pilot program was a product of the contentious negotiations over the Farm Bill last year when House Republicans raised the issue of bringing work requirements to SNAP. Perhaps, through what the states propose and implement, we can learn how to help low income Americans earn enough so they don’t need SNAP or any other kind of government benefit. That, after all, should be the overriding purpose of all anti-poverty programs.

Robert Doar is the Morgridge Fellow in Poverty Studies at the American Enterprise Institute. From 2007 to 2013, he was the commissioner of the New York City Human Resources Administration, the city agency responsible for the cash welfare, food stamp and Medicaid programs.