The Humiliation Is Complete: Assad Can Stay, Kerry Concedes After Meeting With Putin [VIDEO] 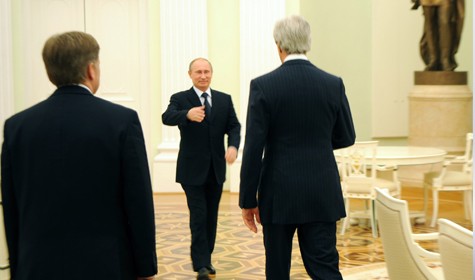 Back on September 20 (so, a full ten days before a three star Russian general strolled into the US Embassy in Baghdad to let the US know that airstrikes in Syria “start in 1 hour”), we said that the US strategy in Syria had officially unraveled.

At the time, John Kerry had just concluded a meeting with British Foreign Secretary Philip Hammond in London. “For the last year and a half we have said Assad has to go, but how long and what the modality is, that’s a decision that has to be made in the context of the Geneva process and negotiation,” Kerry told reporters after the meeting. “It doesn’t have to be on day one or month one [and] there is a process by which all the parties have to come together and reach an understanding of how this can best be achieved.”

“That this a far, far cry from the hardline rhetoric the US was still clinging to just months ago,” we said, adding that “it marks a tacit recognition of what should have been obvious from the very beginning: the US backed effort to assist Qatar and the Saudis in destabilizing the Assad regime was doomed from the start.”

About a month later, ahead of talks in Vienna, WSJ said the following about Washington’s plans for Assad:

The Obama administration entered a crucial round of international talks on Syria’s war prepared to accept a deal that leaves President Bashar al-Assad in place for several months or more during the transition to a new government.

The U.S. shift on the dictator’s future caps months of backtracking on the most significant obstacle to a resolution of the Syrian conflict. While U.S. officials once argued Mr. Assad couldn’t take part in a political transition, they have gradually eased that stance, eventually signaling he wouldn’t have to step down immediately. Now they are planning to negotiate the question of his future in talks being held Friday in Vienna.

The solution Washington sought to broker would “not prejudge the Assad question,” a senior administration official told The Journal.

Of course the Assad “question” has already been “prejudged” – only not by Washington or any of its regional allies. As we’ve been at pains to explain, Tehran isn’t going to allow a US puppet government to be installed in Damascus. It’s out of the question. Losing Damascus to Washington and worse, to Riyadh, would severely impair Iran’s supply lines to Hezbollah and roll back Iranian influence in the region. For Russia, the stakes are also high. Moscow now has an air base and a naval base in Syria and establishing a foothold in Syria is the first step for The Kremlin on the way to supplanting the US as Mid-East superpower puppet master. In short, even is Assad himself ultimately abdicate, the regime (and our apologies for anyone who finds that term pejorative) will remain in one form or another.

On Tuesday, Kerry was in Russia for talks with Vladimir Putin. As Foreign Policy notes, America’s top diplomat was “wicked psyched” that he found a Dunkin Donuts in Moscow:

As for negotiations with Putin over Syria, it appears the humiliation is now complete.

As AP reports, “U.S. Secretary of State John Kerry on Tuesday accepted Russia’s long-standing demand that President Bashar Assad’s future be determined by his own people, as Washington and Moscow edged toward putting aside years of disagreement over how to end Syria’s civil war.”

“The United States and our partners are not seeking so-called regime change,” Kerry said, adding that the focus is no longer “on our differences about what can or cannot be done immediately about Assad.”

In a testament to the fact that mainstream media is beginning to understand just how weak America’s negotiating position has become, AP offered the following rather sarcastic assessment:

President Barack Obama first called on Assad to leave power in the summer of 2011, with “Assad must go” being a consistent rallying cry. Later, American officials allowed that he wouldn’t have to resign on “Day One” of a transition. Now, no one can say when Assad might step down

Kerry also called demands by the “moderate” opposition that Assad step down before peace negotiations begin an “obvious nonstarter.”

But even as Kerry and Sergei Lavrov hailed the talks as a “big negotiating day,” Lavrov’s de facto deputy, the sharp-tongued Maria Zakharova, stressed that “serious differences” remain between the US and Russia with regard to Syria.

One point of contention is Washington’s insistence on differentiating between “moderate” and “non-moderate” elements operating to oust the Assad government.

That and other pressing issues are expected to be discussed next week in New York at what Kerry says will be a “major international conference” on Syria.

As for relations between Moscow and Washington, Kerry said this: “There is no policy of the United States, per se, to isolate Russia.”

Right. No “per se” policy. So in other words, it may not be an explicit, de jure mandate, but it sure as hell seems like a tacit, de facto foreign policy position.

This article originally appeared at ZeroHedge.com at:  http://www.zerohedge.com/news/2015-12-16/humiliation-complete-assad-can-stay-kerry-concedes-after-meeting-putin