Texans Will Be Able To Transact In Gold & Silver; Abbott Signs Texas Gold Depository Into Law

Introduced by State Rep. Giovanni Capriglione (R- Southlake) and four co-sponsors on Feb. 12, House Bill 483 (HB483) will create what some pundits are calling the Texas “Fort Knox.” State officials told the Houston Chronicle that “No other state has its own state bullion depository.”

More importantly, though, the bill creates a means for transactions to occur in these metals. The bill reads, in part:

The new law establishes a yet-to-be-determined secure location for storage of bullion, such as gold and silver.

“Today I signed HB 483 to provide a secure facility for the State of Texas, state agencies and Texas citizens to store gold bullion and other precious metals,” said Abbott. “With the passage of this bill, the Texas Bullion Depository will become the first state-level facility of its kind in the nation, increasing the security and stability of our gold reserves and keeping taxpayer funds from leaving Texas to pay for fees to store gold in facilities outside our state.”

In short, a person will be able to deposit gold or silver – and pay other people through electronic means or checks – in sound money. Doing so has the potential to open the market to sound money in day-to-day transactions.

By making gold and silver available for regular, daily transactions by the general public, the new law has the potential for wide-reaching effect. Professor William Greene is an expert on constitutional tender and said in a paper for the Mises Institute that when people in multiple states actually start using gold and silver instead of Federal Reserve Notes, it would effectively nullify the Federal Reserve and end the federal government’s monopoly on money.

As this happens, a cascade of events can begin to occur, including the flow of real wealth toward the state’s treasury, an influx of banking business from outside of the state – as people in other states carry out their desire to bank with sound money – and an eventual outcry against the use of Federal Reserve notes for any transactions.

Once things get to that point, Federal Reserve notes would become largely unwanted and irrelevant for ordinary people.

While HB483 won’t nullify the Fed’s monetary monopoly on its own, it represents an important step forward in that direction.

Currently, all debts and taxes in Texas must either get paid with Federal Reserve Notes (dollars), authorized as legal tender by Congress, or with coins issued by the U.S. Treasury — very few of which have gold or silver in them.

But the United States Constitution states in Article I, Section 10, “No State shall…make any Thing but gold and silver Coin a Tender in Payment of Debts.”

The legislation in Texas takes a step towards that constitutional requirement, ignored for decades in every state. Such a tactic would undermine the monopoly the Federal Reserve system by introducing competition into the monetary system.

HB483 goes into effect immediately since it received greater than a 2/3 vote in each chamber.  The House passed it 140-4, while the Senate approved it with a 27-4 vote.  Abbott said Friday that the measure will “repatriate $1 billion of gold bullion from the Federal Reserve in New York to Texas.” The state’s gold reserves are controlled by various agencies, including investment funds tied to its public universities. 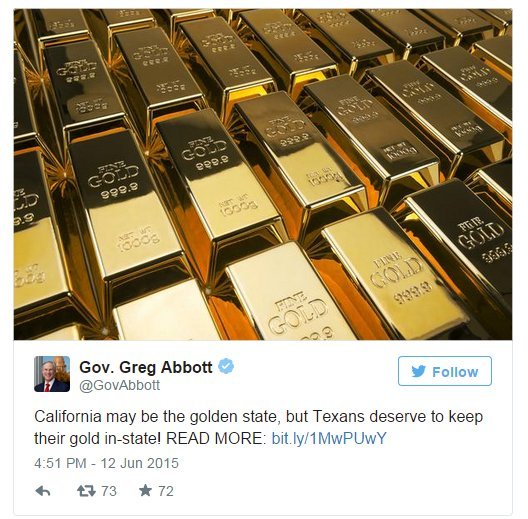 The Tenth Amendment Center is a national think tank that works to preserve and protect the principles of strictly limited government through information, education, and activism. The center serves as a forum for the study and exploration of state and individual sovereignty issues, focusing primarily on the decentralization of federal government power as required by the Constitution.  This article originally appeared at:  http://blog.tenthamendmentcenter.com/2015/06/signed-by-the-governor-texas-law-establishes-bullion-depository-helps-facilitate-transactions-in-gold-and-silver/