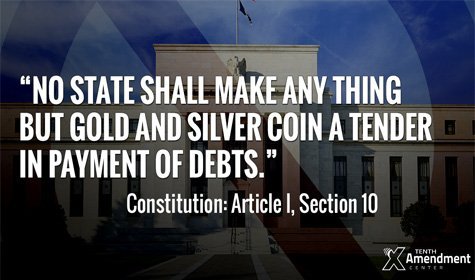 The Constitution for the United States of America is not merely a set of suggestions. So when the Constitution says, in Article I Section 10, “No state shall make any Thing but gold and silver Coin a Tender in Payment of Debts,” it means exactly that.

Recognizing that the departure from gold and silver backing to our money has led to crushing debt and great financial instability, a few freedom-minded state legislatures have begun to consider how to defend themselves and their citizens. In particular, Utah has charted a path towards a widespread acceptance of gold and silver, declaring any gold and silver coins issued by the U.S. government as legal tender in the state — and free from any taxation.

Even though laws such as Utah’s are just a small step in the right direction, they serve an important purpose because they encourage greater use of gold and silver as circulating media of exchange.  And such measures start a conversation with the public about the useful role that gold and silver can play in protecting one’s purchasing power, while hedging against the abuses of Washington politicians and Wall Street bankers.

Utah has a modest population of almost 3 million. However, Oklahoma followed with its legal tender law, bringing the total people impacted to almost 7 million. The more people are exposed to gold and silver, the more they are likely to recognize their superiority as media of exchange and stores of value.

Another benefit of passage of laws like those in Utah and Oklahoma is that they dispense with the notion that gold and silver are merely investments or speculations.

Gains on investments, more times than not, are taxed in one way or another. But gold and silver are “money” and imposing a tax on the exchanging of one form of money for another is both ludicrous and unjust.

People should be encouraged to save in real money.  The inflation tax on every person holding fiat money whittles away at their savings and purchasing power.  While the Federal Reserve Note “dollar” has lost more than 97% of its purchasing power since the Federal Reserve System was created in 1913, gold and silver is a much better store of value, having risen 60 and 20-fold, respectively, in their dollar-denominated price.

Devaluation of “fiat money” is no accident. Even John Maynard Keynes, the socialist who developed today’s economic playbook for central planning through monetary policy, confessed: “By a continuing process of inflation, government can confiscate, secretly and unobserved, an important part of the wealth of their citizens.”

Key to precious metals’ use as legal tender and a form of payment is elimination of regulations that decrease its liquidity – and therefore its usefulness.  Many state and local jurisdictions impose draconian rules on dealers who buy gold and silver from the public, reducing options, raising transaction costs, and endangering financial privacy.

Dealers are often required to collect personal information from sellers, including names, addresses, social security numbers, voter identification cards, and copies of driver’s licenses.  Furthermore, dealers have been forced to upload all this personal information daily into law enforcement databases, along with pictures of the metals purchased.  And finally, some jurisdictions bar dealers from re-selling the gold and silver to anyone for as long as seven days, forcing them to tie up and large amounts of capital and absorb market risk.

It is unimaginable to consider the government forcing a merchant or buyer of lima beans, for example, to disclose or collect personal information. These discriminatory requirements – which don’t apply to redeeming paper money, only redeeming gold and silver – violate basic privacy rights of individuals and substantially burden those who provide important liquidity to gold and silver transactions.

States Can Charter Depositories to Safeguard Gold and Silver

By enacting legislation to establish a state precious metals depository last year, Texas plans not only to pull its state pension fund’s physical gold out of the clutches of Wall-Street bankers, but it will also save money and create jobs by storing the gold inside the Lone Star State.  Privately owned and at no cost to the taxpayer, the state-chartered depository would also enable people to store their precious metals for a fee.  And the involvement of the state potentially provides an additional layer of constitutional protection against federal government intervention

With an account at a depository, people could have the ability to engage in transactions using gold and silver electronically. An account holder could make a purchase and pay the seller by transferring precious metals to the seller’s account or it could be converted to Federal Reserve Notes and deposited into an account at a normal bank. The ability to transact electronically like this may help bring gold and silver further into use as an alternative to using our rickety paper money system.

More fundamentally, the fact that bills such as these are being introduced speaks to an important mindset surrounding gold and silver as legal tender.

Assuming we respect the Constitution, we must accept Article I Section 10 to mean exactly what it says. The implication of this is simple yet resounding: in the question of whether or not states will adhere to their responsibility to make gold and silver a tender in the payment of debts, the burden of proof should fall on the lawmakers and bureaucrats as to why gold and silver SHOULD NOT play this role, not the other way around.

The passage of state legislation that promotes constitutional money is becoming more and more urgent as financial shenanigans of central banks and governments increasingly spin out of control. Bills like those passed in Utah, Oklahoma, and Texas move us toward a new acceptance and use of gold and silver as money.  We hope more states will pick up the mantle before an all-out monetary crisis puts their people and their economies at grave risk.

The Tenth Amendment Center is a national think tank that works to preserve and protect the principles of strictly limited government through information, education, and activism. The center serves as a forum for the study and exploration of state and individual sovereignty issues, focusing primarily on the decentralization of federal government power as required by the Constitution.  This article originally appeared at: http://tenthamendmentcenter.com/2016/08/09/states-should-restore-gold-and-silver-as-legal-tender-before-the-monetary-crisis-arrives/

About the Author:  Jp Cortez is a graduate of Auburn University, a current law school student, and a resident of Charlotte, North Carolina. He is the Assistant Director of the Sound Money Defense League, an organization which is working to bring back gold and silver as America’s constitutional money.