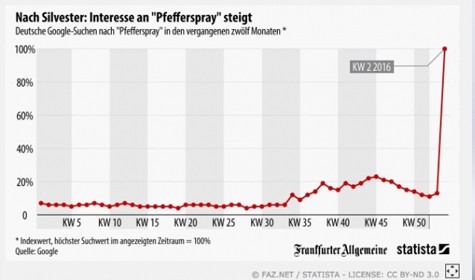 As we’ve documented on a number of occasions over the past three or so months, Germans have a newfound love for pepper spray.

In November, we noted that frightened Germans fearing a “foreign invasion” from the Mid-East, were rushing to stock up on what amounts to migrant-be-gone aerosol just in case a refugee should get any designs on trying to get too close.

“There is fear” explains Kai Prase, managing director of DEF-TEC Defense Technology GmbH in Frankfurt, one of the major producers of repellents. “For the past six to seven weeks we have been practically sold out.”

Yes, “there is fear”, and that fear only grew after New Year’s Eve when dozens of women reported being sexually assaulted by “gangs” of drunken “Arabs” in Cologne, among other cities.

The New Year’s incidents triggered even more interest in deterrent technology and before you knew it, Germans were Googling “pepper spray” like there was no tomorrow:

Of course, as we noted earlier this month, pepper spray isn’t much good against a Kalashnikov and besides, mace doesn’t sound like nearly as much fun as a “non-lethal gas pistol,” a replica firearm that shoots tear gas cartridges.

“People no longer feel safe, otherwise they would not be buying so many products here,” a seller in North-Rhine Westphalia told Deutsche Welle who adds that the seller, like many of his colleagues, has been moving “an average of three times as many alarm, gas, and signal guns as he was prior to the attacks that took place in Cologne on New Year’s Eve.”

Although you can’t go out and buy an AK-47 in Germany, you can obtain a so-called “small arms permit”, which gives you the right to own all sorts of fun things like the aforementioned gas pistol. For those who aren’t familiar with the weapon, here’s a helpful video (note the 1:57 mark when we get a look at “a person running with a… a club at a person who draws and fires on them”):

There you go. You can shoot someone in the face and not kill them as long as you “have a spotless record ” when you apply for the permit.

“There has been an increase of at least 1,000 percent or more in Google search queries for gun permits since January,” Felix Beilharz, a social media expert from Cologne told DW.

And that’s not all.

Germans are also getting more interested in self defense courses. “Currently, those offering self-defense courses are also profiting from the concerns and fears of many German citizens. Many such courses are booked out for the next several weeks – that was not the case a year ago,” DW says.

Here’s a tweet that pretty much sums up the mood in Germany:

So perhaps Anders Rasmussen – the prevention specialist at the Danish Crime Prevention Council who we mocked earlier today – was correct to say that a move to make non-lethal deterrents legal “may quickly develop into a sort of armed competition between civilians,” as there does indeed appear to be a non-lethal arms race going on in Germany.

And just like that, Angela Merkel’s move to take in 1.1 million asylum seekers has turned the streets of Germany into the Wild West, where every man, woman, and child is carrying some manner of weapon.

The fine for pepper spraying a would-be assailant in Denmark is 500 kroner. Given the preponderance of Danes who are sneaking away to Germany to buy non-lethal weapons, we wonder what the penalty is for shooting an attacker in the face with a tear gas cartridge at point blank range.

This article appeared at ZeroHedge.com at:  http://www.zerohedge.com/news/2016-01-28/german-small-arms-sales-skyrocket-after-refugee-attacks