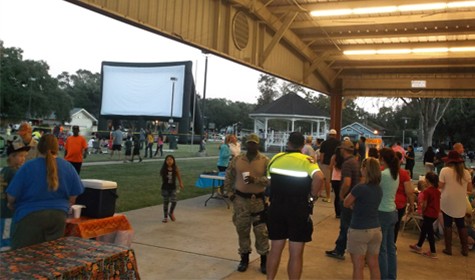 The National Night Out on Crime was held on Saturday in Sealy with the “Movie In The Park” held at Levine Park in Sealy.  Sealy Police, Fire, Austin County Sheriff’s Office, FBI and several other law enforcement departments hosted events for the kids that were both fun and educational.  The main event for the evening was the feature presentation of Frankenweenie, a 2012 Tim Burton film from Disney.  The film was shown on a huge inflatable screen, projector and audio equipment purchased by the Sealy Police Department from drug forfeiture funds that have been seized.  Previously, the Police Department had to pay Alamo Drafthouse for the use of their inflatable screen and audio equipment in addition to purchasing movie right to show the video.  It is the hope that with the purchase of the department’s own screen and equipment, they will be able to host more events at different locations for the city.  We were able to have the new Sealy Chief of Police Chris Noble sit down with us and tell us a little about the day and what the purpose of the event is for.