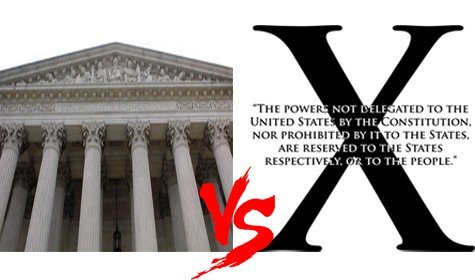 If the book “Demise of the American Republic” were ever written, the history of the Supreme Court would likely occupy a bulk of its pages. Two recent rulings from the Supreme Court of the United States (SCOTUS) serve to illustrate this point. These rulings may appear rather innocuous on the surface; however, these rulings are anything but harmless. The great task of SCOTUS, according to James Madison, was for it to be an “IMPENETRABLE BULWARK” in protecting State rights. Let me be blunt – It Has Failed. In these decisions, Pliva v. Mensing and American Electric Power v. Connecticut the Supreme Court has chosen to place Federal Regulatory Law above State rights. I hear you…“doesn’t the Supremacy Clause establish that to be the proper order of things?” you say. Yes, the Supremacy Clause does establish that:

Our founders knew that if the Laws of the United States were not held to be supreme over the laws of the States, they, according to Alexander Hamilton, “would otherwise be a mere treaty, dependent on the good faith of the parties, and not a government, which is only another word for POLITICAL POWER AND SUPREMACY.” (Fed.#33). Without Constitutional supremacy, compliance to the law would be completely voluntary and wholly unenforceable. Yes, I hear you… “So where is the problem KrisAnne?” Here’s the catch.

Alexander Hamilton goes on to say,

“But it will not follow from this doctrine that acts of the large society which are not pursuant to its constitutional powers, but which are invasions of the residuary authorities of the smaller societies, will become the supreme law of the land. These will be merely acts of usurpation, and will deserve to be treated as such. Hence we perceive that the clause which declares the supremacy of the laws of the Union, like the one we have just before considered, only declares a truth, which flows immediately and necessarily from the institution of a federal government. It will not, I presume, have escaped observation, that it expressly confines this supremacy to laws made pursuant to the Constitution;…” (Fed.#33).

What Hamilton was saying is that the Supremacy Clause only makes Federal Law supreme when that Federal law is consistent with and established pursuant to the Constitution. When it is not thusly established, it is an “act of usurpation”. And that, unfortunately, is exactly what has happened at the hands of the SCOTUS. It has, by its ruling, supported the unconstitutional authority of a body, other than Congress, to establish law and then given that body supremacy over State rights.

There is no Constitutional basis for the EPA or FDA to make laws. These are Executive branch agencies (see EO 13575 sec. 3); law making is reserved through the Constitution to the Legislative branch. When the SCOTUS chooses to make regulations, which are established by an unconstitutional agency, supreme over the States via the Supremacy Clause, as they did in Pliva v. Mensing and American Electric Power v. Connecticut, they are usurping the States’ rights.

The interesting fact is that in the Bill of Rights of 1689 creating laws outside the body designed to create laws was seen to be an attempt to “subvert and extirpate…the laws and liberties of [the] Kingdom”. I wonder why the SCOTUS doesn’t feel this way.

The powers delegated by the proposed Constitution to the federal government are few and defined. Those which are to remain in the State governments are numerous and indefinite. The former will be exercised principally on external objects, as war, peace, negotiation, and foreign commerce; with which last the power of taxation will, for the most part, be connected. The powers reserved to the several States will extend to all the objects which, in the ordinary course of affairs, concern the lives, liberties, and properties of the people, and the internal order, improvement, and prosperity of the State. (emphasis added)

History and facts dictate that we must consider the intent of the Founders when properly interpreting the Constitution. (If you believe otherwise, you probably have not read my book.) Here we have Madison telling us that the Federal Government has no Constitutional authority to establish a law that deals with the ordinary course of affairs, concerning the lives, liberties, and properties of the people. That is a duty reserved to the state. However, the executive branch through these Federal Agencies, have imposed regulation after regulation that create restrictions and levy fines on the people of the states that have nothing to do with war, peace, negotiations, and foreign commerce (No, commerce between Connecticut and New York is not foreign commerce, even though to us southerners they may seem like foreign lands).

Our founders established separation of powers because they had seen a history of over 700 years of tyranny usurping the rights of the people. They knew what it looked like, and they knew what it would take to prevent it and defeat it. They established the Legislative branch to be separate from the Executive branch, so that one man could not impose laws upon a people based upon his will; and they established a Judicial branch to check them both. It makes no difference that these laws are established by executive regulatory agencies, those agencies are still controlled by the will of one man and are rarely subject to the Constitutional checks established. This is an act of tyranny with which our founders were intimately acquainted. Our founders brought with them, to the new colonies, the Bill of Rights of 1689. This document lists grievances against King James II. In the preface to these grievances, the people say:

Whereas the late King James the Second, by the assistance of divers evil counsellors, judges and ministers employed by him, did endeavor to subvert and extirpate the Protestant religion and the laws and liberties of this kingdom; (emphasis added)

Our founders knew that without the proper checks and balances, the executive branch would have the power to destroy liberty. They also anticipated the attempt to sidestep these checks. James Madison stated in his Speech to Congress – June 8, 1789:

In other instances [the Constitutions lays] down dogmatic maxims with respect to the construction of the government; declaring, that the legislative, executive, and judicial branches shall be kept separate and distinct: Perhaps the best way of securing this in practice is to provide such checks, as will prevent the encroachment of the one upon the other…independent tribunals of justice will consider themselves in a peculiar manner the guardians of those rights; they will be an impenetrable bulwark against every assumption of power in the legislative or executive; they will be naturally led to resist every encroachment upon rights expressly stipulated for in the constitution by the declaration of rights. (explanation and emphasis added)

So what do we do when the “independent tribunals of justice” have failed in their duties as guardians of the rights of people? The fantastic thing about our founders was they understood human nature. Alexander Hamilton stated that “experience is the oracle of truth; and where its responses are unequivocal; they ought to be conclusive and sacred.” Our founders learned from their own history that people would become inattentive to their rights; that tyranny would attempt to reassert itself as it had time and time again. Understanding this, James Madison continued with his speech in 1789 to offer a “plan B” to the courts:

Beside this security there is a great probability that such a declaration in the federal system would be enforced; because the state legislatures will jealously and closely watch the operation of this government, and be able to resist with more effect every assumption of power than any other power on earth can do; and the greatest opponents to a federal government admit the state legislatures to be sure guardians of the people’s liberty. (emphasis added)

We must remember that, according to James Madison, the primary job of our State Legislatures was to be guardians of the people’s liberty against federal encroachment. This is now our last and greatest hope to save the sovereignty of our States. Our Legislators must understand that this is the time when they must stand against these unconstitutional agencies and their unauthorized intrusion on the rights of States, which is to say the rights of the people. We must again establish ourselves as the engaged citizen government that was demanded by our founders in order to keep this Constitutional Republic. We must reassert ourselves as the leaders of our nation and remind the legislators that they are representatives of the people, working for the people, not celebrities vying for camera time and re-election. When tumultuous times arise, we must show why we are an exceptional nation. Our exceptionalism stems from the understanding of the value of Liberty and the dedication of our lives, fortunes, and sacred honor to preserve it. So, in the famous words of Patrick Henry, “why sit we here idle?”