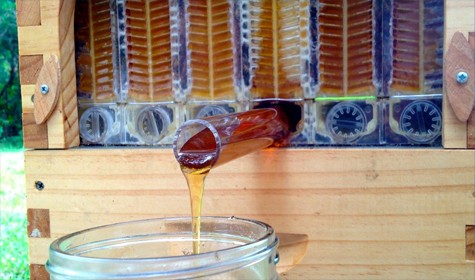 Imagine being able to get the honey out of a hive without disturbing the bees.  Sounds like a dream, right?  Well, father and son beekeepers Stuart and Cedar Anderson have developed a new hive system that can do just that.  The Flow Hive has taken the two over 10 years to design but, promises to revolutionize the beekeeping and honey industry.

The Flow frame consists of already partly formed honeycomb cells. The bees complete the comb with their wax, fill the cells with honey and cap the cells as usual. When you turn the tool, a bit like a tap, the cells split vertically inside the comb forming channels allowing the honey to flow down to a sealed trough at the base of the frame and out of the hive while the bees are practically undisturbed on the comb surface.

When the honey has finished draining you turn the tap again in the upper slot resets the comb into the original position and allows the bees to chew the wax capping away, and fill it with honey again.

Below is a video demonstration of their prototype hive: