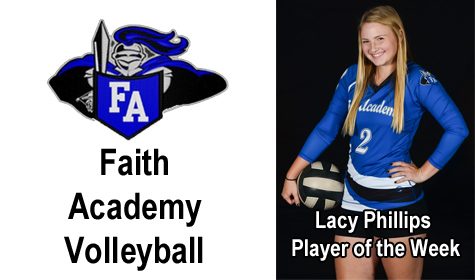 The Faith Academy Lady Knights volleyball team traveled to Conroe on Friday and Saturday to take part in an invitational tournament hosted by Conroe Covenant Christian School. The Lady Knights spent the week in practice preparing for the tough tournament, knowing that their first pool play game would be against the Christian Homeschool Sports Ministries team who they lost to at their home tournament a few weeks ago.

Despite coming out strong, the Lady Knights hit a rough patch midway through the first game on serve receive and struggled to recover. The girls didn’t let the loss tear them down and proceeded to beat the other two teams in their pool to secure the second place seed in their pool and a spot in the gold bracket in Saturday’s games. During pool play on Friday, the Lady Knights changed around some players’ positions and their rotation, and this proved to be a strategic move for the team and benefited them the rest of the tournament.

“We’ve finally got everyone here and healthy so it was exciting seeing players settle into their positions and really start attacking the ball,” commented Coach Dawson. On Saturday the Lady Knights played against Woodlands Christian Academy, a 4A school from Houston. The girls came out very hesitant and dug themselves into a hole on serve receive pretty quickly. Despite losing the first match by 12 points, the Lady Knights did not give in and came out very aggressive in game two which led them to a 25-21 victory.

Game three, the tie-breaking game, seemed to crawl as both teams stayed even on the score until the Lady Knights missed three consecutive serves and made too many hitting errors. They lost the game 11-15. “We killed ourselves on errors in that game,” said Coach Dawson. “And in a tiebreaking game to 15 points, you don’t have any room for errors.”

After the disappointment of losing that game, the Lady Knights went on to play for third place against Family Christian Academy during which the girls struggled to recover from the emotional and mental roller coaster of the previous game. They fought hard but couldn’t stay consistent and aggressive and lost 0-2. “This weekend was all about the team. We bonded together on the court and in the van. The girls felt success and failure together which bonded them even closer. Even though the tournament came to a heartbreaking end for us, we grew closer and learned from the experience so I would say we came out with a win,” remarked Coach Dawson.

The Lady Knights will be starting their district play on Tuesday, August 30th with a home game against The Woodlands Prep and a non-district home game on Thursday against Shiner.

The player of the week is Lacy Phillips