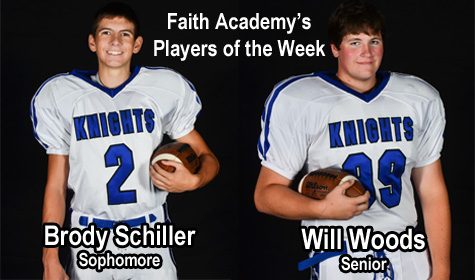 The Knights were victorious in their opening game against the Houston Sanchez Eagles. The Knights were outnumbered in players, but fought hard all game. The game started off with a 64 yard touchdown run by Tyler Fontenot, Bellville. He ran in the extra point to bring the score to 7-0. With the ball on the Knight 15, the Eagles faced 4th and 9. The Knights defense stood tall and denied them a first down. The next possession Cameron Crawford, Bellville, connected with Pierce Newcomb, Hempstead, on a 17 yard touchdown pass. Tyler Fontenot converted the extra point and gave the Knights a 14-0 lead. The third offensive series ended with another 32 yard touchdown pass from Jacob Henderson, Bellville, to 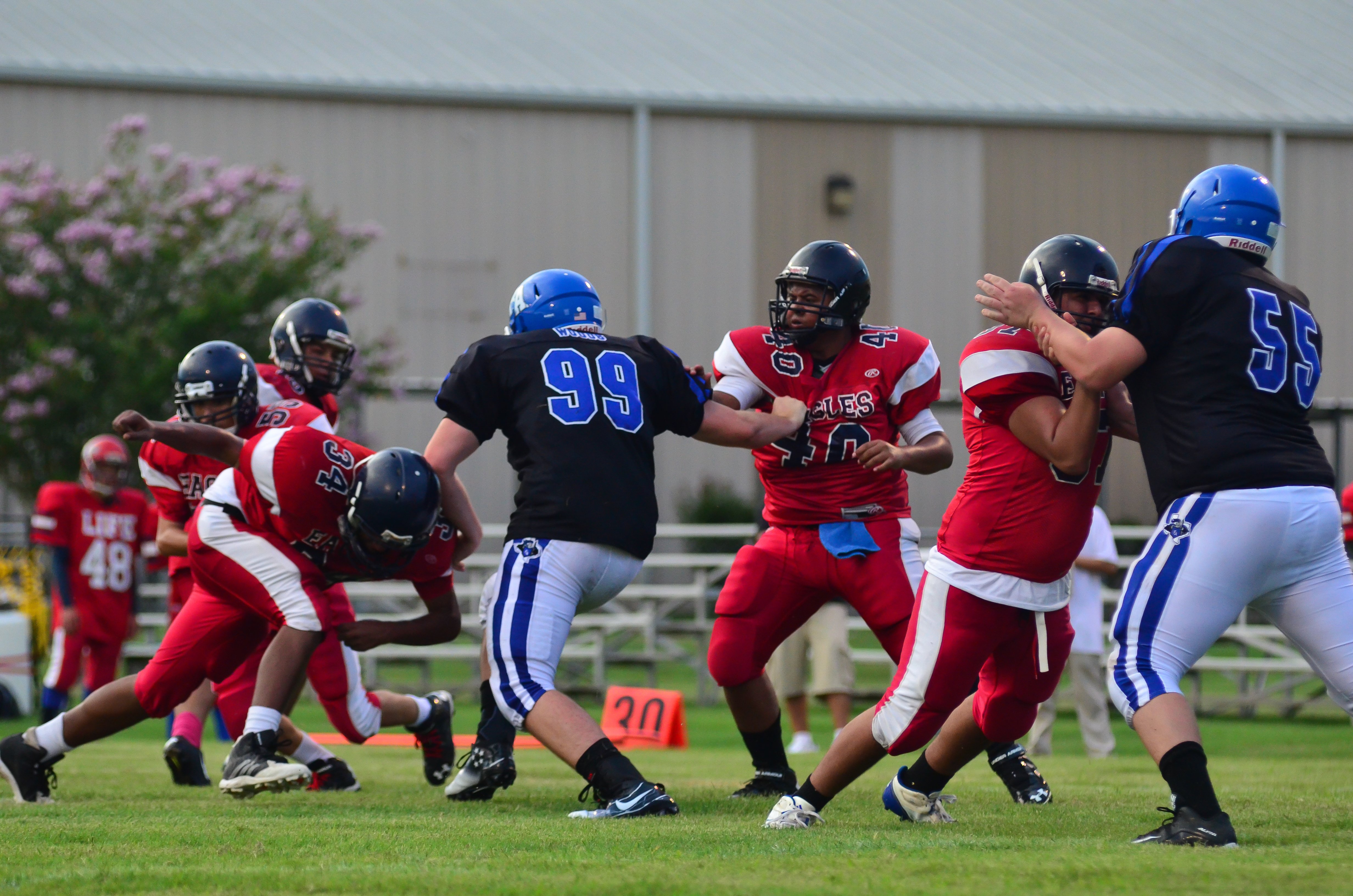 Fontenot. The extra point was converted by way of a Henderson pass to Brody Schiller, Sealy. That brought the score to 21-0. The Knights went back on defense where Tyler Fontenot had a pick six and kicked the two point conversion brining the score to 29-0. The next offensive series Henderson hit Will Woods for a 35 yard touchdown pass. The extra point was no good and brought the score to 35-0. The next offensive series had Henderson connecting with Fontenot for a 65 yard touchdown pass and the extra point was no good. Sanchez Charter scored a touchdown and ran it in for the extra point, but the Knights still had a 41-7 lead. This time the Eagles faced a 4th and 16 from the Knights 28 yard line. The Eagles decided to punt, which is not done very often in six man football. Fontenot caught the ball on the 10 yard line and scampered 70 yards for a Knight touchdown. That brought the halftime score to 47-7. Sanchez Charter received the ball to start the second half and converted along 4th down play to keep their drive alive. The next play, Pierce Newcomb intercepted the ball and returned it back 70 yards for a game ending touchdown. In six man football, if you are leading by 45 or more points from halftime on, the game is over. The final score 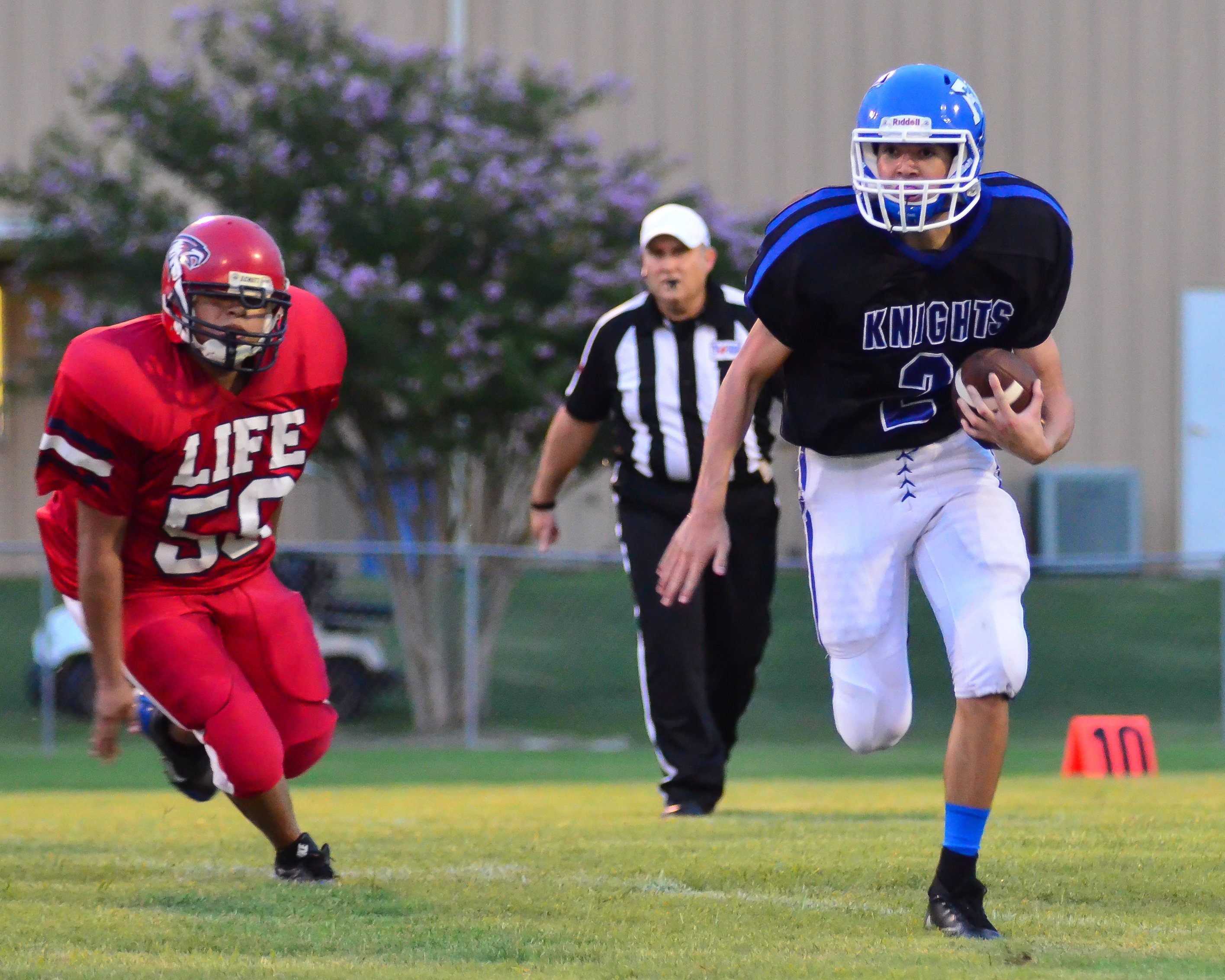 was 53-7. Defensively, the Knights held the Eagles to less than 150 yards of offense. Will Woods put pressure on the opposing quarterback all night long and Brody Schiller made several great touchdown saving open field tackles. Other defensive notes were Freshman Trason Robards, Brenham, with 3 tackles and Sophomore Jeff Perry, Bellville, with 2 tackles and a fumble recovery. These young men fought hard all game long. We only have 8 and they have to play both offense and defense.

The Knights success was a team effort. The air attack was led by Sophomore Cameron Crawford who was 5 of 7 passing for 116 yards and 2 touchdowns and Freshman Jacob Henderson who went 2 of 2 for 101 yards and 2 touchdown. The Knights receivers were Sophomore Tyler Fontenot with 4 receptions for 101 yards and 2 touchdowns, Sophomore Brody Schiller with 2 receptions for 29 yards, Freshman Pierce Newcomb with 2 receptions for 27 yards and 1 TD, and Senior Will Woods with 1 reception for 35 yards and 1 TD.
I am pleased in the growth that this team has made from day one. We are a young team with 7 of the 8 players being freshmen and sophomores and only 1 senior. We are happy to have a team and they enjoy playing for each other. We will be off for two weeks and be at it again against Conroe Covenant.