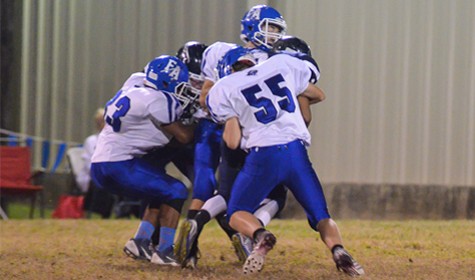 The Faith Academy Knight’s traveled to Seguin for the Regional Football game against Seguin Lifegate Falcons on Friday November 20, 2015.

The Knights started with the ball first.  On the opening drive, Senior Troy Herring’s (Bellville) first carry went for 5 yards.  The next play Herring suffers a knee injury which will sideline him for the rest of the game.  Later in the quarter the nights lost defensive Miguel Guerrero (Bellville) To a head and neck injury.  At this point, the Knights chose not to quit but to fight till the end.  At the end of the first quarter the Knights trailed 23-0.

In the second quarter, the Knights tried but could not get the offense rolling.  The Knights were unable to get a first down all night.  The game was called at halftime with the score 25-0, applying the mercy rule.

The Knights fought hard all year long with 3 seniors, 1 junior, and 8 freshmen.  The ended the season with a 6-4 record.