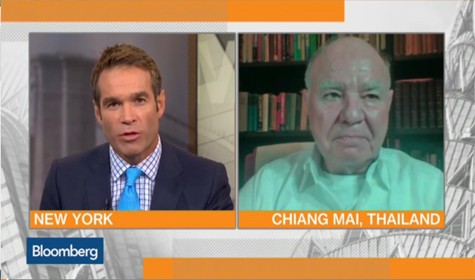 Markets have “reached some kind of a tipping point,” warns Marc Faber in this brief Bloomberg TV interview. Simply put, he explains, “because of modern central banking and repeated interventions with monetary policy, in other words, with QE, all around the world by central banks – there is no safe asset anymore.” The purchasing power of money is going down, and Faber “would rather focus on precious metals because they do not depend on the industrial demand as much as base metals or industrial commodities,” as it’s now “obvious that the Chinese economy is growing at nowhere near what the Ministry of Truth is publishing.”

On what central banks hath wrought…

I think that because of modern central banking and repeated interventions with monetary policy, in other words, with QE, all around the world by central banks there is no safe asset anymore. When I grew up in the ’50s it was safe to put your money in the bank on deposit. The yields were low, but it was safe.

But nowadays, you don’t know what will happen next in terms of purchasing power of money. What we know is that it’s going down.

On the idiocy of QE…

in my humble book of economics, wealth is being created through, essentially, a mixture of capital spending, and land and labor. And if these three production factors are used efficiently, it then creates a prosperous society, as America became prosperous from its humble beginnings in 1800, or thereabout, to the 1960s, ’70s. But it’s ludicrous to believe that you will create prosperity in a system by printing money. That is economic sophism at its best.

On the causes of iunequality…

unfortunately the money that was made in U.S. stocks wasn’t distributed evenly. And we have precise statistics, by the way published by the Federal Reserve, who actually benefited from the stock market boom post-2009. This is not even one percent of the population. It’s 0.01 percent. They took the bulk.

And the majority of Americans, roughly 50 percent, they don’t own any shares anyway. And in other countries, 90 percent of the population do not own any shares. So the printing of money has a very limited impact on creating wealth.

On China’s lies… and its commodity contagion…

I indicated on this program already a year ago, the Chinese economy was decelerating already then. It’s just that the fund managers didn’t want to accept it.

And now it’s obvious that the Chinese economy is growing at nowhere near what the Ministry of Truth is publishing in China, but more likely either no growth at all or maybe around two percent, but no more than that.

On Asian currency devaluation… and a Chinese economic collapse…

Yes. These countries just followed the example of what Mr. Draghi and Kuroda tried to achieve with lowering the value of their currencies, which is actually to create a depression in real incomes and a contraction of world GDP in dollar terms, and a contraction of world trade in dollar terms, which is of course negative for economic growth around the world.

Well, I mean, we have to put the achievements of China and also of President Xi in the context of what China was 20, 30 years ago, and what it is today. And it’s a remarkable change. Now will China have a very serious setback? And don’t forget, the U.S. after 1800 had numerous financial crises, and depressions, and the Civil War, and went through World War I, and through the depression years, and World War II and so forth. And the country continued to grow.

I think China is, from a cyclical point of view now, in a very serious downturn, serious. And from a secular point of view, I think there is still tremendous growth opportunity in China in the long run. But, as I said, cyclically I think they’re going to have a tough time

On where to invest…

I would rather focus on precious metals, gold, silver, platinum because they do not depend on the industrial demand as much as base metals, as industrial commodities.

If I had to turn anywhere, where, as you say, the opportunity for large capital gains exists, and the downside risk is in my opinion, limited, it would be the mining sector, specifically precious metals, mining companies, in other words, gold shares.

I would buy mining stocks. I am not saying they will go up, but I think they will go down less than a lot of other shares. And by the way, if you ask me about relative value, I think emerging markets are not yet cheap, cheap, but I think the return expectation I would have over the next seven to 10 years by investing in emerging markets would be much higher than, say, in U.S. stocks. The U.S. market is overhyped and is expensive in terms of valuations from a historical perspective. Emerging markets are no longer terribly expensive.