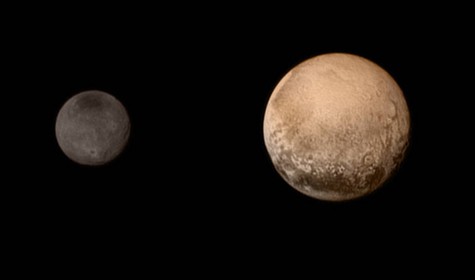 NASA’s New Horizons mission has answered one of the most basic questions about Pluto—its size.

Mission scientists have found Pluto to be 1,473 miles (2,370 kilometers) in diameter, somewhat larger than many prior estimates. Images acquired with the Long Range Reconnaissance Imager (LORRI) were used to make this determination. This result confirms what was already suspected: Pluto is larger than all other known solar system objects beyond the orbit of Neptune.  [Click HERE to see Pluto’s size in relation to Earth.]

“The size of Pluto has been debated since its discovery in 1930. We are excited to finally lay this question to rest,” said mission scientist Bill McKinnon, Washington University, St. Louis.

Measuring Pluto’s size has been a decades-long challenge due to complicating factors from its atmosphere. Its largest moon Charon lacks a substantial atmosphere, and its diameter was easier to determine using ground-based telescopes. New Horizons observations of Charon confirm previous estimates of 751 miles (1208 km) kilometers) across

LORRI has also zoomed in on two of Pluto’s smaller moons, Nix and Hydra.

“We knew from the time we designed our flyby that we would only be able to study the small moons in detail for just a few days before closest approach,” said New Horizons Principal Investigator Alan Stern of the Southwest Research Institute, Boulder, Colorado. “Now, deep inside Pluto’s sphere of influence, that time has come.”

Nix and Hydra were discovered using the Hubble Space Telescope in 2005. Even to Hubble, they appeared as points of light, and that’s how they looked to New Horizons until the final week of its approach to Pluto. Now, the latest LORRI images show the two diminutive satellites not as pinpoints, but as moons seen well enough to measure their sizes. Nix is estimated to be about 20 miles (about 35 kilometers) across, while Hydra is roughly 30 miles (roughly 45 kilometers) across.[see size relation image HERE] These sizes lead mission scientists to conclude that their surfaces are quite bright, possibly due to the presence of ice.

What about Pluto’s two smallest moons, Kerberos and Styx? Smaller and fainter than Nix and Hydra, they are harder to measure. Mission scientists should be able to determine their sizes with observations New Horizons will make during the flyby and will transmit to Earth at a later date.

Story taken from nasa.gov at:  http://www.nasa.gov/feature/how-big-is-pluto-new-horizons-settles-decades-long-debate