Germany In Shock After “Monstrous” Attacks, Rape By 1,000 Men “Of Arab Or North African Origin” 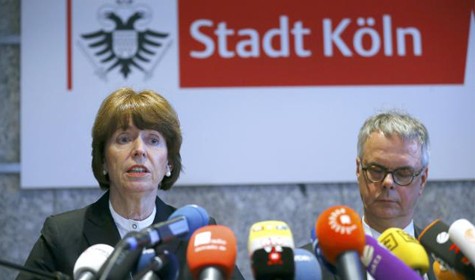 Monday, we were shocked to learn that as German anger boils over at the country’s unprecedented refugee wave, one or more so far unknown assailants fired shots through the window at a home for asylum seekers in western Germany injuring one resident as he was sleeping. As AP noted it wasn’t immediately clear who was responsible for the incident or what the motive was. However, Darmstadt prosecutors’ spokeswoman Nina Reininger told news agency dpa: “If someone shoots at housing which has people inside, I assume that it is a targeted attack.”

An officer of the crime scene investigation unit examine the shattered window glass of a refugee shelter in Dreieich near Offenbach, Germany, Monday, Jan. 4, 2016

Yesterday, we were just as shocked to read that, even as we expected, the animosities between the two groups have dramatically escalated, and that the mayor of Cologne has summoned police for crisis talks after nearly 100 women reported they were robbed, threatened or sexually molested at the New Year’s celebrations outside the city’s cathedral by young, mostly drunk, men, police said on Tuesday. One woman said she was raped.

According to BBC, “the scale of the attacks on women at the city’s central railway station has shocked Germany.” About 1,000 drunk and aggressive young men were involved.

The initial shock will quickly transform to furious anger, because more important in this specific case was the origin of the 1,000 drunk assailants, who split into groups, and attacked women in the square. Citing the police chief Wolfgang Albers, BBC notes that the men were of “Arab or North African region“, adding that they were mostly between 18 and 35 years old. He added that the attack was a “completely new dimension of crime”.

BBC adds that what is particularly disturbing is that the attacks appear to have been organised. Around 1,000 young men arrived in large groups, seemingly with the specific intention of carrying out attacks on women.

Fearing a public backlash, Cologne mayor Henriette Reker said there was no reason to believe that people involved in the attacks were refugees. Nonetheless, after a crisis meeting, she admitted the attacks were “monstrous” adding that “we cannot allow this to become a lawless area.“

This, of course, puts her in a very precarious position if it is found that the attackers were indeed refugees.

Reker was stabbed in the neck and seriously hurt in October, just a day before she was elected mayor. Police said that attack appeared to be motivated by her support for refugees.

At this point it is too late for damage control, however, as this has become a case of guilty until proven innocent, especially since politicians involuntarily may be stirring the pot: “We will not accept the disgusting attacks on women. All perpetrators must be held to account,” said Justice Minister Heiko Maas, a Social Democrat, in a tweet.

As Reuters adds, the attack has stirred “strong emotions in Germany where Chancellor Angela Merkel has welcomed people fleeing war zones in the Middle East and Africa.”

The political reaction was immediate: the right-wing Alternative for Germany (AfD), which has gained in polls in part at Merkel’s expense thanks to a campaign against refugees, said she should close the border.

“Mrs Merkel, is Germany ‘colourful and cosmopolitan’ enough for you after the wave of crimes and sexual attacks?” tweeted AfD chief Frauke Petry.

Meanwhile, Germany’s embattled prime minister urged people to respect strangers. Merkel said that “We .. respect everyone, even if we don’t know them,” she said. “That is the case not only for Germans, but for everyone.”

A police vehicle patrols at the main square and in front of the central railway station in Cologne, Germany, January 5, 2016.

Unfortunately for Merkel, it is now too late to contain the incipient, and increasingly more violent – and soon, lethal – conflict between growing sections of the local population and the country’s refugees wave, because as Reuters further adds, and as we have noted repeatedly, there are almost daily attacks on refugee shelters.

“Events like that in Cologne foster xenophobia,” Roland Schaefer, head of Germany’s association of towns and localities, told reporters. Yes they do, and it was very obvious to everyone long before the recent break out of violence that when mixing two combustible cultures, these would be precisely the results.

Unless, of course, outcomes such as these were precisely what the otherwise very perceptive Merkel had in mind all along. Recall AIG’s answer to “what Europe wants” back in May 2008:

To use global issues as excuses to extend its power:

As for the “monstrous” attack in Cologne, the local news website Koelner Stadt-Anzeiger says the suspects were already known to police because of frequent pickpocketing in and around Cologne central station. Police are trying to find out whether the men who targeted women on Thursday night, surrounding, molesting and robbing them, organized their assaults through social media. They are also studying mobile phone and CCTV surveillance videos.

For now, the local police are searching for the 1,000 assailants. They will be found, and if confirmed that the “monstrous” attackers were indeed recent refugees, the dramatically escalating conflict within German society is about to take a quantum jump into ever greater violence.

This article was published by ZeroHedge at:  http://www.zerohedge.com/news/2016-01-05/germany-shock-after-monstrous-attacks-rape-1000-men-arab-or-north-african-origin