Gallup Finds Stunning Decline In Americans’ Respect For US Government 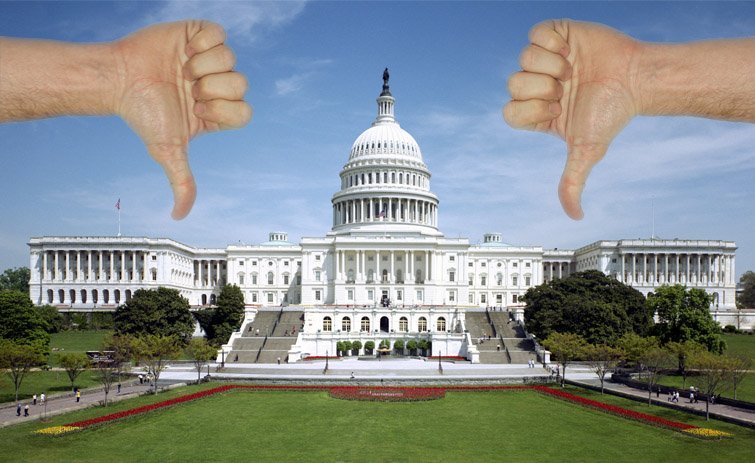 On June 9th, Gallup’s Editor-In-Chief, Frank Newport, headlined «Americans Want More Than Just Budget Cuts» and reported that, «Gallup’s latest update shows that 28% of Americans have a favorable opinion of the federal government, while 55% have an unfavorable opinion. That’s the lowest rating for any business or industry sector we tested». Here are the details on that net minus 27% (55% minus 28%) favorability-rating for «The federal government»:

The basic point in Dr. Newport’s June 9th article is that the reason why Americans dislike «The federal government» isn’t that it’s ‘too big’ or ‘spends too much money’ or any of the other excuses that the (widely despised) Republican Party claims, but is instead that, «Americans think that Congress is corrupt and not focused on the interests of the people. They want their representatives to compromise rather than rigidly stick to principles».

Gallup’s 28 September 2015 report about perceptions of Congress made note, also, that there was an extraordinary jump in 2006 in the percentage saying that «Most members are corrupt», from 38 % saying that in 2005, up to 47% saying that in 2006. After 2006, the percentages saying that, rose only slightly. Perhaps 2006 was a post-Iraq-invasion syndrome, in which increasing numbers of Americans came to distrust the U.S. government that had clearly lied and invaded Iraq under false pretenses. The Gallup Poll’s findings about Americans’ perceptions regarding the question »In general, are you satisfied or dissatisfied with the way things are going in the United States at this time?» first peaked at 61% right before the invasion, in the poll taken on «3/3-5/03» or March 3-5 of 2003, then subsided a bit but finally rose even higher, to 62%, in the poll taken during «8/22-25/05» or August 22-15 of 2005, and then it stayed generally above that and briefly soared into the 80s during 2011, but is now in the high 60s, still slightly higher than the post-Iraq-invasion disillusionment period.

In any case, what seems clear is that Americans now strongly dislike ‘our’ federal government and generally consider it to be «corrupt» or not really «our» government, but instead to be somehow «their» government of »us». And, also obviously, if this long-term trend continues, then the American public will be heading into a pre-revolutionary condition, and, beyond that, into a revolutionary one. If the existing long-term trend continues, then the result will be either the overthrow of the U.S. federal government, or else a lock-down of first the Internet and then the public, at a time of already overcrowded prisons. Of course, when there is not space to accommodate additional prisoners, then military compounds become resorted to — and martial law.

The United States is certainly a country that is currently heading into some kind of convulsive transition — but, certainly, also, an extremely unpleasant transition, even if, somehow, one that can reach a stability which is better, not worse, than that of the earlier post-WW-II era. And, of course, if it turns out to be a pre-WW-III transition, then the result will be catastrophic for the entire world.

The way that the U.S. federal government has responded to the current transition, up till now, is to continue the lies. But there is no certainty that that will continue to work, even for the people at the very top.

This article appeared at ZeroHedge.com at:  http://www.zerohedge.com/news/2017-06-12/gallup-finds-stunning-decline-americans-respect-us-government