Forget Big Brother, Facebook Is Watching (And Listening) To Everything You Do [VIDEO] 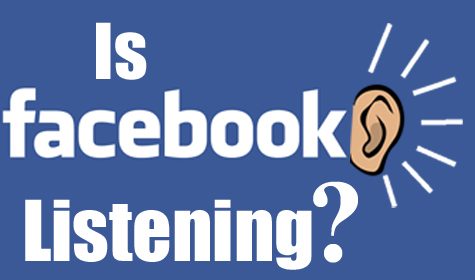 It’s irresistible, enticing and addicting.  And, as News10.com reports, it’s available 24-hours a day all over the world to billions of people. Facebook beckons to users seemingly with a two-prong approach – both the pressure and pleasure to post. We share stories, photos, triumphs and tragedies. It is ingrained into our daily lives so deeply that studies show people check Facebook, on average, 14 times a day.  With all those eyes all over the globe dialed in and the purchasing power available, the online giant has tapped into a controversial delivery of data into its intelligence gathering.  It all starts with something that you may not even realize is enabled on your phone.

A little-known feature deeply embedded in Facebook’s privacy settings is causing users to think twice aboutnot just what they write but what they say.  As TheAntiMedia.org’s Clarice Palmer explains…

The debate over Internet privacy and the responsibility social media companies should carry in protecting user privacy never ceases to spark controversy — among both users and tech insiders. But while Facebook, one of the most popular social media networks, struggles with accusations of news suppression and even fraud, a new report on the network’s microphone settings is reigniting past fears of surveillance that were never fully addressed.

According to University of South Florida Professor Kelli Burns, Facebook is a huge part of the lives of smartphone users. Due to this widespread addiction, Burns explains, “Anytime you’re using your phone, any kind of information that you’re putting into your phone, looking at on your phone, Facebook can access that.” But details regarding what you’re doing or what you’re browsing while on Facebook are not the only type of data the Silicon Valley giant can access. The social media’s microphone feature, which can be enabled by the user via Facebook’s settings, is also listening.

A few months back, a Facebook user took their concerns over the microphone settings to Reddit.The post quickly went viral, prompting Facebook to issue a statement on the matter. According to the social media network, the company does not “record your conversations.” Instead, the statement claimed, if the user chooses to turn the microphone feature on, Facebook will “use your microphone to identify the things you’re listening to or watching based on the music and TV matches we’re able to identify. If this feature is turned on, it’s only active when you’re writing a status update.”

But According to ABC’s WFLA, Burns might have been able to prove Facebook isn’t telling the whole story behind this technology.

“We tested the theory with Kelli, and even we were surprised by what we found and saw.

“Kelli enabled the microphone feature and talked about her desire to go on safari, right down to her mode of transportation. ‘I’m really interested in going on an African safari. I think it’d be wonderful to ride in one of those jeeps,’ she said aloud, phone in hand.

“Less than 60 seconds later, the first post on her Facebook feed was a safari story that seemed to pop up out of nowhere. Turns out, it was a story that had been posted three hours earlier. And, after mentioning a jeep, a car ad also appeared on her page.”

This test, the news organization contended, demonstrates how Facebook picks up “buzz words” in order to show that particular user ads and posts matching their interests. The fact the professor made those comments after turning the feature on may serve as an example of how easily Facebook can trick users into giving the company access to their private conversations.

Though Facebook claims it does not store or share user information, the very existence of the technology may give hackers, including government-backed security experts, a reason to explore private data further, putting the privacy — and even safety — of Facebook users in danger. What’s more concerning about this issue is the company’s previous association with the U.S. National Security Agency’s PRISM program, which gave federal agents access to users’ private data, including, emails, photos, and instant messages, among other things. While Facebook’s more recent claims concerning user privacy regarding the microphone feature might be legitimate, the company’s former cooperation with NSA officials could indicate the feds may seek to explore the microphone feature — whether Facebook agrees with them or not.

Smart TV manufacturers like Samsung have recently been forced to publicly address privacy concerns after news broke the technology was listening to users’ conversations. As the same users learn Android Smart TVs may also present vulnerabilities that give hackers the ability to record what they do, other members of the tech industry, like Facebook, might also face growing obstacles and skepticism from users.

In contrast, though Apple has aligned with the federal government in at least one case, the company was widely praised for standing for privacy rights in a legal standoff involving the FBI over the San Bernardino shooter’s iPhone. But unlike Apple, whose hesitation regarding lobbying practices has earned negative attention from Congress in the past, Facebook has a relatively cozy relationship with Washington. Whether this relationship is mutually beneficial to both parties — and whether Facebook will respond like Apple has — remains to be seen.

But Market-Ticker’s Karl Denninger rages further – demanding an answer to “how is this legal?”

…the article Facebook appears to confirm that it does indeed use your microphone — which means it listens to and uploads the contents of speech and other sound around you when you are using the app.

Explain to me, if you would, why you’d ever allow such a device in your pocket?  Further, please explain to me exactly why you believe Facebook would only use this for “ad targeting”….. when there is literally nothing to prevent them from doing otherwise.

And finally, please explain why this is legal and Facebook and its officers are not under criminal indictment, particularly when you consider that people other than you may well speak within the listening range of your microphone, and while you may have given consent they did not and further, they had no idea they were being recorded!

So you want to have a conversation with me, eh?  Well I don’t consent to being recorded, and in many states (including Florida) unless said recorder is either openly and notoriously present and thus obvious (giving me the clear option to refuse to talk to you in its presence) or you have my consent it’s a felony to make that recording in any situation where I reasonably believe I’m not being taped or overheard.

Oh by the way, the use to which you put the recording is immaterial; it is not legal in this state to do so for “purely” advertising purposes; any such use is unlawful and in fact it is a felony in this state.

Heh Zuckerpig — your ass ought to be indicted for this crap, and Florida is not alone in criminalizing this activity.

And finally, here is a media design professor exposing how his Facebook provacy settings were opted back in without notice or consent…

Check your Facebook Ads privacy settings. They opted you back in without notice or consent. https://t.co/7gJx8UcXZc pic.twitter.com/McffGfTRQo

This article appeared at ZeroHedge.com at:  http://www.zerohedge.com/news/2016-05-31/forget-big-brother-facebook-watching-and-listening-everything-you-do