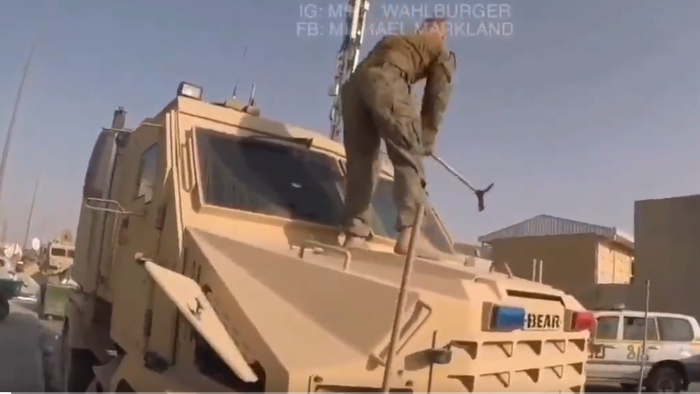 Rare footage has emerged at the end of a week which marked the close of America’s 20-year long war in Afghanistan. While the last US soldier in Kabul left late in the night Monday, video is circulating days later purporting to show US forces deliberately destroying their own military equipment in the days leading up to the final departure.

Dozens of Humvees and less than 100 aircraft including helicopters and Afghan national forces planes were “unarmed and disabled” – left for the Taliban to find them inoperable, though clearly in many other cases across the country the Taliban found usable equipment in abundance, which they’ve put on public parade of late. The below purports to show a series of brief clips of US military carrying out the destruction at Kabul airport…

The video first emerged on Facebook late this week, and is thought to be the personal video of a US soldier who had been stationed at Kabul’s airport.

A soldier can be seen smashing the windshield of an armored vehicle with a sledgehammer, while others are seen inside ripping out electronics and punching the vehicle’s computer system.

Elsewhere Americans are seen apparently attempting to disable locks in important rooms at the airport so they can’t be easily used in the near future. The Taliban has accused the US of hampering airport operations on the civilian side as it attempts to restore civilian aviation traffic, something Washington disputes.

Perhaps the most interesting allegation is that US soldiers “poisoned” the inside of vehicles and aircraft with some kind of deadly chemical concoction, though there’s as yet no evidence for this…

“If you want to get inside an armored car you will die,” a Taliban commander told a Turkish broadcaster days ago while standing on the airport tarmac.

However, this feared “poisoning” of equipment didn’t appear to stop some jihadists from having their “fun” inside of hardware that was left intact in many other locations…

This article appeared at ZeroHedge.com at:  https://www.zerohedge.com/geopolitical/footage-emerges-showing-us-troops-frantically-smashing-equipment-leaving-kabul