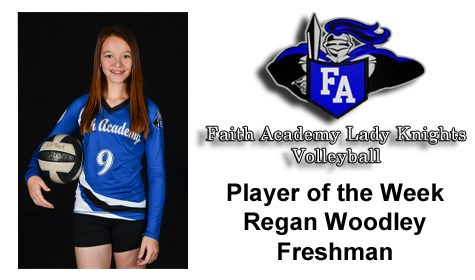 “During district play we’ve been focusing on maintaining a consistent level of play no matter what’s happening on the other side of the net. This week the girls raised their standards and came out strong every game, performing their skills to the best of their ability,” said Coach Dawson.

Regan Woodley had a phenomenal passing game, ending with a passing average of 2.4 (out of 3.0). Freshman Isabella Schoenborn also had a great game with 5 aces and a passing average of 2.0. Coach Dawson remarked after the team’s performance on Thursday, “The whole team played to their full potential. We served aggressively, passed the ball well, and were able to run a strong offense. In previous games it felt like we were hitting our mid-season slump with poor passing and serving. But the team fought against that this week, and they looked better than ever!”

The Lady Knights look ahead to another week of district play with an away game on Monday with The Oaks Adventists and two home games on Tuesday, Lifestyle Christian and Thursday, Covenant Academy.