Facebook Tumbles After Antitrust Probe Expands To 47 States And Territories 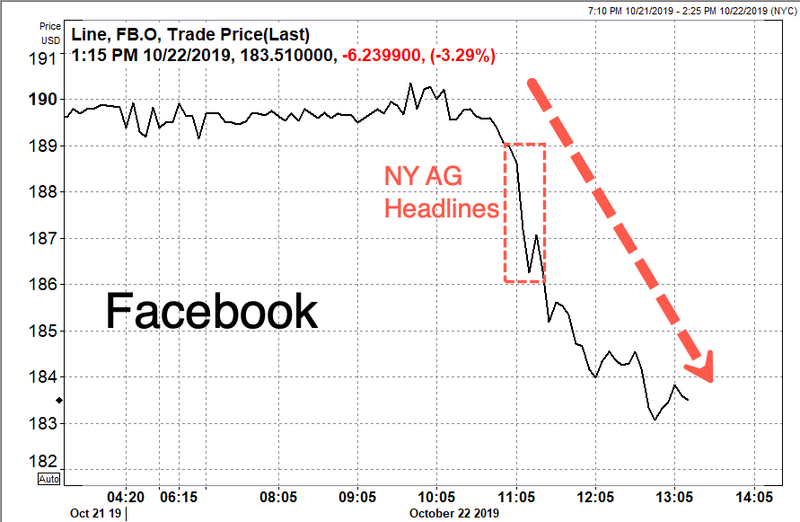 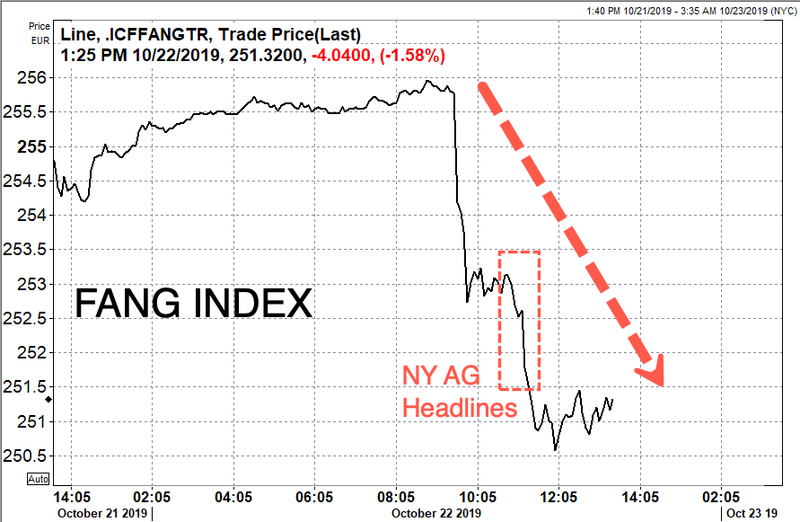 Reuters noted that Facebook’s stock decline was mostly due to the antitrust probe.

NY AG James also said in the statement that the leadership team investigating Facebook are the attorney generals of Colorado, Florida, Iowa, Nebraska, North Carolina, Ohio, Tennessee, and the District of Columbia.

Arizona Attorney General Mark Brnovich:
“Free and competitive markets help ensure consumers have access to the highest quality and most cost-effective products and services. Enforcement of state consumer protection and antitrust laws in the modern marketplace demands new strategies and focused efforts from state and federal authorities. By working together, state attorneys general are leading the way in ensuring digital platforms respect consumer privacy and do not engage in anticompetitive behavior.”

Connecticut Attorney General William Tong:
“Social media is a critical part of doing business in today’s economy. Any effort by Facebook to unlawfully stifle competition could cause wide-ranging harm to smaller companies, restrict consumer choice, and increase costs for all. Connecticut is working closely with attorneys general across the nation in taking a very hard look at Facebook to determine whether it is engaging in unlawful competitive practices. We cannot prejudge the outcome of this investigation, but stand ready to follow the evidence where it takes us to protect American consumers.”

Delaware Attorney General Kathy Jennings:
“Together with other state attorneys general from both parties, we are investigating whether Facebook has broken the law through anticompetitive practices or other acts that harm consumers. I am dedicated to protecting the rights of Delawarean consumers, which includes the right to participate in the internet economy without fear of being taken advantage of by social media companies and other service providers. Today’s confirmation of our participation in the multistate investigation is just that; the investigation will reveal what laws, if any, have been violated.”

Indiana Attorney General Curtis Hill:
“Just like individual citizens, corporations must be held accountable for following the law. And just like individual citizens, corporations also enjoy the presumption of innocence until facts prove otherwise. In this case, we must follow the facts to determine whether Facebook has engaged in anti-competitive behavior in violation of state and federal antitrust laws. To protect consumers and the free market, we must promote conditions under which all entities may compete on a level playing field in accordance with the rule of law.”

Louisiana Attorney General Jeff Landry:
“Big Tech must account for its actions. I am proud to join my Republican and Democrat colleagues in efforts to ensure Tech Giants can no longer hide behind complexity and complicity.”

Massachusetts Attorney General Maura Healey:
“It’s important that the internet remain fair and open to everyone. We are participating with a broad coalition of states in an investigation of Facebook’s business practices.”

Michigan Attorney General Dana Nessel:
“Facebook has played a major role in shaping our global online economy as one of the largest social media platforms in the world. It is illegal for a business to use its market power to engage in anticompetitive conduct in an effort to achieve or maintain a monopoly. Our personal data is the biggest commodity in today’s online economy and, as the chief law enforcement officer of the state, it is my duty to ensure Michigan residents’ personal data doesn’t continue to be pillaged in a monopolist’s quest to control social media and advertising markets.”

Mississippi Attorney General Jim Hood:
“Over the past year, I have raised concerns of potential barriers to competition and decreases in the quality of service when consumer data is concentrated in the hands of only a few. In this investigation, we will determine whether Facebook has restrained trade, thereby reducing the quality of consumers’ choices or increasing the price of advertising.”

Missouri Attorney General Eric Schmidt:
“Even the biggest of the big tech companies should be held accountable, and that’s what we’re seeking to do with this investigation. This coalition of attorneys general will investigate Facebook’s business practices to determine whether they engaged in anticompetitive behavior, put user data at risk, reduced consumer choice, and more.”

Nevada Attorney General Aaron D. Ford:
“As your attorney general, your safety is my priority — be it on the streets or online. This investigation focuses on Facebook’s potential anticompetitive conduct as a tech giant, and should serve as a reminder that no business, however big or small, is above the law. Nevada is pooling resources with other states to determine whether business practices have affected users.”

North Carolina Attorney General Josh Stein:
“I’m increasingly concerned about the way the internet has come to be dominated by a few major tech companies. When companies in any industry get too big and too powerful, they can use that power to harm their consumers and to damage markets. We need to protect competition in markets so that consumer benefit from choices, so that their privacy is protected, and to ensure that the next generation of tech innovators aren’t snuffed out by their powerful competitors.”

Ohio Attorney General Dave Yost:
“Dominance of big tech is changing the way we live and how society is shaped. This is a time for fact finding and careful thought and I am fully committed to the process.”

Pennsylvania Attorney General Josh Shapiro:
“Facebook is a dominant force in the social media industry, and with that dominance comes an obligation to ensure their practices are not stifling competition. Our bipartisan coalition of 46 of my Attorney General colleagues will follow the evidence wherever it leads, and we will not hesitate to take action to protect the rights of consumers.”

South Carolina Attorney General Alan Wilson:
“Competition built this country and free and competitive markets are important for social media platforms. We are part of a bipartisan group investigating whether Facebook violated any state or federal laws. To ensure that there is meaningful market-based competition, we will work exhaustively to verify that companies follow the law.”

Virginia Attorney General Mark Herring:
“Big tech and social media companies like Facebook must comply with anti-trust laws that promote competition and choice, and consumer protection laws that guard the privacy and personal data of users. Given Facebook’s nearly unprecedented influence in so many sectors of the economy and political process, this bipartisan coalition of attorneys general is committed to ensuring that Facebook is complying with the law and meeting its obligations.”

Wisconsin Attorney General Josh Kaul:
“When competition is blocked, innovation can be stifled and consumers are harmed. Facebook, like every other company, must comply with our antitrust laws, and this investigation is looking into whether it has. No one is above the law.”

District of Columbia Attorney General Karl A. Racine:
“The District of Columbia has joined this investigation to ensure Facebook is giving a fair shake to District residents and the American people. No company gets a pass if it throttles competitors and exploits consumers.”

And to make matters worse for Facebook, the latest headlines coming from DOJ’s Makan Delrahim indicate that the department would break up a tech company if there was ample evidence of antitrust violations.

This article appeared at ZeroHedge.com at:  https://www.zerohedge.com/markets/facebook-tumbles-after-antitrust-probe-expands-47-states-and-territories