ESPN Loses A Record 621,000 Subscribers In One Month 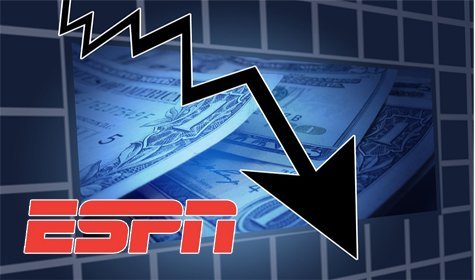 Last April, HBO effectively marked the death of the cable TV bundle when they decided to launch “HBO Now” and sell their content directly to consumers for $15 per month.  While other “over-the-top” providers have existed for years, this decision was pivotal because it was the first time that any major content provider decided to break with the traditional cable delivery model and go directly to consumers.  Within a year, HBO Now had amassed 1 million subscribers.  Meanwhile, Pay TV households collapsed around the same time as “cord cutting” accelerated.

Per the following data from Barclays’ Media and Telecom analyst, Kannan Venkateshwar, the decline of Pay TV households really accelerated in 2Q 15 around the same time that HBO Now was launched.

Now, the biggest beneficiary of the cable TV bundle, ESPN, which exploited it’s “must have” content for decades to negotiate ever higher rates with cable TV providers while forcing those rates down the throats of consumers by insisting its content be included in all of the channel “bundles”, finds itself in the unfamiliar territory of losing millions of subs per year amid surging contents costs.  In fact, according to Outkick The Coverage, ESPN lost over 600,000 subscribers in October alone which is worth over $50mm in annual revenue.

Yesterday Nielsen announced its subscriber numbers for November 2016 and those numbers were the worst in the history of ESPN’s existence as a cable company — the worldwide leader in sports lost 621,000 cable subscribers. That’s the most subscribers ESPN has ever lost in a month according to Nielsen estimates and it represents a terrifying and troubling trend for the company, an acceleration of subscriber loss that represents a doubling of the average losses over the past couple of years, when ESPN has been losing in the neighborhood of 300,000 subscribers a month.
These 621,000 lost subscribers in the past month alone lead to a drop in revenue of over $52 million and continue the alarming subscriber decline at ESPN. Couple these subscriber declines with a 24% drop in Monday Night Football ratings this fall, the crown jewel of ESPN programming, and it’s fair to call October of 2016 the worst month in ESPN’s history. But this isn’t just a story about ESPN, the rapid decline in cable subscribers is hitting every channel, sports and otherwise. It just impacts ESPN the most because ESPN costs every cable and satellite subscriber roughly $7 a month, over triple the next most expensive cable channel.

The historical cable TV game goes a little something like this…in any given market there is typically 3-4 subscription TV providers (2 satellite companies, 1 (or more) cable providers, and a Telco).  Those providers sign multi-year deals to buy content from media companies (e.g. ESPN, Discovery, Time Warner, Viacom, etc. etc) and then bundle them all together and pass the costs of those contracts along to consumers. Every 3-5 years those content contracts come up for renewal and the cable providers (i.e. consumers, since the costs just get passed along) are effectively forced to pay whatever increase ESPN (and others) asks for or risk losing millions of subscribers.

Now, there are roughly 100mm pay-TV households in the U.S. and, because of the channel “bundling” scam, approximately 90% of them are forced to “buy” ESPN whether they consume sports content or not.  Moreover, because ESPN is considered “must have” content they’re able to extract the most value from the cable providers getting roughly $7 per sub per month, or more than double the next highest content provider…tack on a little extra margin for the cable provider and the average consumer is paying $120 per year for ESPN even if they never watch a single minute of sports programming…seems fair, right?

Fortunately for consumers, and not so much for ESPN, the power in the system, courtesy of “over-the-top” content providers like HBO and Netflix, is just starting to shift from the media companies to consumers…which will be disastrous for the historical beneficiaries of the cable bundle.  Outkick The Coverage laid out the math on what pay TV sub losses means for ESPN:

A loss of 3 million subscribers would leave ESPN with 86 million subscribers in 2017. That would be down roughly 15 million subscribers in the past five years alone. Given that ESPN makes right at $7 a month from every cable and satellite subscriber a year, that means ESPN’s subscriber revenue would be $7.22 billion in 2017. Toss in an additional $1.8 billion or so in advertising revenue and ESPN’s total revenue would be $9 billion. We don’t know what the costs of running ESPN are — employees, facilities, equipment, and the like have to cost a billion or more — but it’s fair to say that ESPN is probably still making money in 2017. Just nowhere near what they used to make.
But those sports rights costs are going up and those subscriber revenue numbers are going down.
So if we’re very conservative and project that ESPN continues to lose 3 million subscribers a year — well below the rate that they are currently losing subscribers — then the household numbers would look like this over the next five years:

At 74 million subscribers — Outkick’s projection for 2021 based on the past five years of subscriber losses — ESPN would be bringing in just over $6.2 billion a year in yearly subscriber fees at $7 a month. At $8 a month, assuming the subscriber costs per month keeps climbing, that’s $7.1 billion in subscriber revenue. Both of those numbers are less than the yearly rights fees cost.

But that’s just the short-term incremental impacts.  The real question is how many consumers would actually purchase ESPN if the bundle truly disappeared and consumers were given the option to buy all content a la carte (which we suspect is the inevitable end game)?  If we assume that 45mm households would be willing to purchase ESPN directly, at their current cost of $7 per month, then that would equate to roughly $3.8BN in revenue per year or about half of their $7.5BN in annual content costs…which we suspect is a slight problem for Disney.

But, like it not, a la carte content purchases are the way of the future.  While cable providers used to be incentivized to protect the “channel bundle” the advent of the internet and over-the-top content providers means that their true value offering to consumers is now in their broadband and not the content.  Therefore, it’s not terribly surprising that, as Bloomberg points out, new a la carte, streaming TV services are becoming very popular.

AT&T Inc. set a price of $35 a month for a new online-streaming TV service with 100 channels or more, and the company may experiment with “a la carte” programming, giving customers choice on what channels they pay to watch.

The competition for cable-like online services is suddenly fierce. YouTube has been working for months on the paid live-TV streaming service, called Unplugged. Hulu LLC, which is co-owned by Fox, Disney, Comcast Corp. and Time Warner, will introduce its own service in the coming months, and Amazon.com Inc. and Apple Inc. have explored the idea.

Of course, ESPN isn’t the only content company that has benefitted from the forced charity of the American consumer.  We suspect that many other cable content providers are also about to face a very turbulent transition as well.

This article appeared at ZeroHedge.com at:  http://www.zerohedge.com/news/2016-10-29/hbo-killed-cable-bundle-and-espn-latest-victim

Texas Students To Hear From NASA Astronauts Aboard Space Station