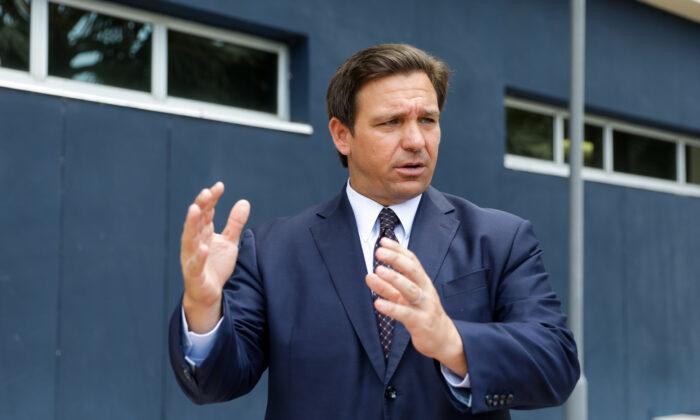 Florida Gov. Ron DeSantis set $8 million in his 2022–23 budget to transport illegal immigrants out of The Sunshine State. He proposed the spending in the Freedom First Budget (pdf) to protect against harms resulting from illegal immigration. The spending may include the transportation of unauthorized aliens located within Florida to other states or the District of Columbia.

“In yesterday’s budget, I put in $8 million for us to be able to transport people illegally [in the United States] out of the state of Florida,” he said during a press conference on Friday.

“If you sent [illegal immigrants] to Delaware or Martha’s Vineyard or some of these places, that border would be secure the next day,” he said.

DeSantis also encouraged more counties to participate in the U.S. Immigration and Customs Enforcement’s (ICE) 287(g) program, under which individuals who have been arrested on criminal charges and are being booked into the county jails are asked about their immigration status.

Other proposed measures to reduce the harms of illegal immigrants include listing convicted illegal aliens on a public website.

DeSantis threatened to send illegal immigrants to Delaware back in November. He said his office is looking at legal avenues after his administration alleged that about 70 flights of illegal aliens were sent to Jacksonville, Florida, after being picked up by agents along the U.S.–Mexico border.

“We’re going to get together and figure out what we can do in the immediate term to protect folks in Florida,” DeSantis told reporters, noting that his options are limited because the federal government controls the immigration policies and actions.

But “if they’re not doing that,” DeSantis added, “then clearly the state should be able to come in and provide protection, and so that’s what we’re going to be looking to do.”

“If they’re going to come here, we’ll provide buses,” DeSantis said, before proclaiming, “I will send them to Delaware.”

This article appeared at ZeroHedge.com at:  https://www.zerohedge.com/political/desantis-proposes-8-million-budget-relocate-illegal-immigrants-delaware-marthas-vineyard