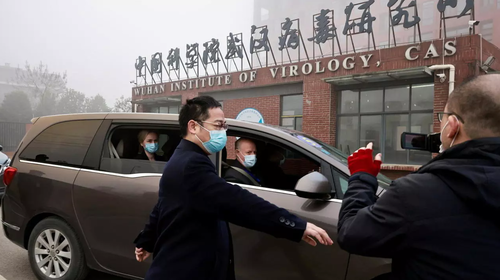 It came as no surprise that China disingenuously seized on this month’s World Health Organization (WHO) trip to try and claim the COVID-19 pandemic actually started abroad, while at the same time a number of global headlines essentially echoed “nothing to see here” – particularly on widespread suspicions the virus originated in a Wuhan military lab.

But now fresh Wall Street Journal reporting strongly suggests this first ever and much-hyped WHO trip to ‘get to the bottom’ of the virus’ origins likely didn’t even scratch the surface in terms of a real investigation. In particular the team of scientists and researchers was reportedly blocked by Chinese authorities from accessing crucial data on 174 of the country’s earliest cases.

Citing WHO investigators supposedly caught in the middle of what they described as “heated exchanges” over the lack of transparency, Chinese authorities “refused” to provide the team with the necessary “raw, personalized data on early Covid-19 cases that could help them determine how and when the coronavirus first began to spread in China…”

Feb. 3 photo of WHO team entering Wuhan Institute of Virology, via Reuters

Front and center in the controversy is the following allegation:

The Chinese authorities turned down requests to provide such data on 174 cases of Covid-19 that they have identified from the early phase of the outbreak in the Chinese city of Wuhan in December 2019.

In preparation for the carefully planned trip to Wuhan, Beijing provided their own “summaries” of the data but not the hard data itself.

When this demand to access the raw underlying data was made, the WHO investigators were rebuffed, essentially being left with only the Chinese scientists’ version of what the data shows. One WHO researcher emphasized in a statement to WSJ that access to the hard data is standard, but was not followed in this case.

“They showed us a couple of examples, but that’s not the same as doing all of them, which is standard epidemiological investigation,” Australian microbiologist Dominic Dwyer said of the WHO trip and findings. “So then, you know, the interpretation of that data becomes more limited from our point of view, although the other side might see it as being quite good.”

Obviously the #CCP is hiding something…

But why did it take @WHO over a year to investigate early COVID cases? https://t.co/OLxXKqqF2u

So far the Chinese side has yet to comment, and will likely reject the allegations. While the WHO team initially said it was “extremely unlikely” that the coronavirus which has turned the world upside down in efforts to fight it came from the Wuhan Institute of Virology after visiting the lab, we wonder just how thorough their investigation was… or was it just a PR trip to willingly play softball with the CCP?

After all, this latest revelation strongly points to the WHO team being merely treated to the Chinese interpretation of the most crucial of all underlying data, namely the “raw, personalized data” on the first infections.

“China’s reluctance to provide the data adds to concerns among many foreign governments and scientists about a lack of transparency in China’s approach to the hunt for the pandemic’s origins,” underscores the WSJ report. “The U.S. State Department said this week it wants to see data underlying the WHO probe.” So it sounds like we’ve once again come full circle on the ‘mysterious’ origins and China’s role.

This article appeared at ZeroHedge.com at:  https://www.zerohedge.com/covid-19/who-reveals-china-refused-access-raw-data-earliest-covid-cases