Boehner’s Plan for Netanyahu to Address Congress is Unconstitutional 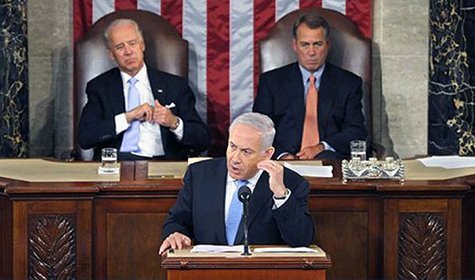 As has been widely reported, House Speaker John Boehner has invited Israel’s Prime Minister Netanyahu to address the U.S. Congress.  If Congress does host the speech, would it be unconstitutional?  Peter Spiro at Opinio Juris suggests that it would.  I agree.

First, Congress has no Article I, Section 8 to host a foreign leader.  (Moreover, the necessary and proper clause, the usual refuge of Congress when it lacks an express power, isn’t available here, because Congress isn’t passing a law.  The power is only to “make all Laws which shall be necessary and proper…”).

Second, reception of foreign leaders is an exclusive power of the President.  Article II, Section 3, provides that “he [the President] shall receive Ambassadors and other public Ministers.”  In this situation, Prime Minister Netanyahu, appearing as the official representative of his country, should be classed as a “public Minister.”  (The alternative would be a strange result: that the President would receive the Israeli ambassador, but not Israel’s head of government).  The President’s power here is properly understood as exclusive – both because that is how the reception power has traditionally been regarded since the Washington administration and because that is the implication of specifically calling it out in Article II.  Consider the other presidential powers specifically identified in Article II: to make treaties (subject to Senate approval); to nominate judges, ambassadors and other executive officers; to make recess appointments; to execute the law; to commission officers of the United States – all are exclusive.  So too is the reception power, which is granted in parallel with these powers.

Of course, a foreign leader may appear before Congress at the invitation of the President (as has happened many times in the past).  The President’s reception and communication powers include the power to decide how an ambassador or foreign minister shall be received and with whom he should communicate; the President might think an appropriate reception should include an appearance before Congress.  I see no constitutional difficulty with that determination.  The present case is different, though, because Congress cannot rely on the President’s reception power for authorization.

As described in The Executive Power over Foreign Affairs, George Washington as President asserted his role as the “sole channel of official intercourse” with foreign nations.  (Letter from Washington to the Emperor of Morocco, Dec. 1, 1789, cited at 111 Yale L.J., p. 317; further discussion of the point at pp. 318-322).  Notably, Washington quarreled with French ambassador Edmond Genet in 1793, who sought to enlist U.S. support for France in its conflict with Britain.  When Washington insisted on neutrality, Genet attempted to communicate directly with Congress, which he suspected was more sympathetic to France than the President.  Washington, through Secretary of State Thomas Jefferson, responded sharply:

Jefferson upbraided (scolded) Genet for attempting to contact Congress at all, declaring that all of Genet’s transactions must occur with the Executive of the United States.  Any communications between the President and Congress were none of his business, and he could not interfere.  The “President must be left to judge for himself what matters his duty or the public good may require him to propose to the deliberations of Congress.”

(The Executive Power over Foreign Affairs, 111 Yale L.J. at 322, quoting Letter from Jefferson to Genet, Dec. 31, 1793).  Ultimately Washington asked France to recall Genet, in part due to his attempts to circumvent the President and appeal instead to the supposedly pro-French Congress.

The current situation  replays the events of 1793.  Netanyahu presumably believes (probably correctly) that Congress is more sympathetic to his nation’s predicament than is the President, and that by appealing directly to Congress he can pressure the President into a more favorable policy.  However, as Jefferson explained to Genet, the President is the channel of communication between the United States and foreign powers, and “no foreign agent can be allowed … to interpose between him and any other branch of Government.”  (Id. at 321, quoting Letter from Jefferson to Genet, Nov. 22, 1793).  The Constitution assures this result first by failing to convey any diplomatic power to Congress, and second by giving the President control over both outgoing communication (via U.S. ambassadors, who are removable by the President) and incoming communication (via foreign ambassadors and other public ministers, who are received by the President).

And as an aside, if the current facts do not seem to make the constitutional point sharply, consider the situation had a Democratic Congress invited Fidel Castro, Daniel Ortega or Mikhail Gorbachev to address Congress over President Reagan’s objection.

Michael D. Ramsey is Professor of Law and Director of International and Comparative Law Programs at the University of San Diego School of Law, where he teaches and writes in the areas of Constitutional Law, Foreign Relations Law and International Law.  He is the author of THE CONSTITUTION’S TEXT IN FOREIGN AFFAIRS (Harvard University Press 2007), the co-editor of INTERNATIONAL LAW IN THE U.S. SUPREME COURT: CONTINUITY AND CHANGE (Cambridge University Press 2011), and author or co-author of numerous articles on foreign relations law in publications such as the Yale Law Journal, the University of Chicago Law Review, the Georgetown Law Journal and the American Journal of International Law.

NOTE: This post was originally published at The Tenth Amendment Center.

The Devil Went Down to Texas: The Utter Evil of the Uvalde Massacre