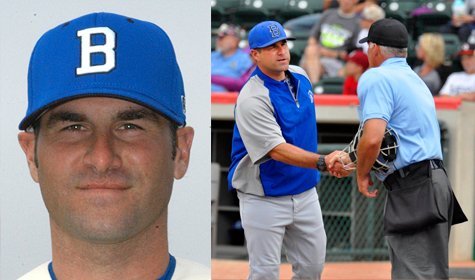 Blinn College baseball coach Harvey McIntyre has been named the American Baseball Coaches Association/Diamond Sports Company NJCAA Division I Regional Coach of the Year after leading the Buccaneers to the NJCAA World Series for the first time in 22 years.

McIntyre’s Buccaneers placed fifth at the World Series, defeating Cochise (Ariz.) 7-4 in the tournament opener, then topping No. 1-ranked Chattahoochee Valley (Ala.) 10-2. Blinn qualified for the World Series by defeating Alvin in the Region XIV Conference Tournament championship.

“This is a reflection of our players and what they accomplished, as well as our assistant coaches, Jonathan Ogden and Jordan Kopycinski,” McIntyre said. “It’s a group effort. Our kids did a great job taking this next step and putting this program back among the nation’s elite.”

McIntyre will be honored at the American Baseball Coaches Association Annual Convention in Orlando, Fla., on Jan. 3.

McIntyre was previously named the 2014 Region XIV Conference and Southern District Coach of the Year.

This marked McIntyre’s 14th season with the program, a span in which the Buccaneers have compiled a 246-164 record. He served seven seasons as an assistant coach before being named head coach in 2008.

A Brenham native, McIntyre is a 1995 graduate of Brenham High School, where he played baseball and advanced to the state championship under coach Earl Hathaway. He began his college career at Howard College (1996-97), then transferred to Northwestern State (La.) University, where he played for the demons under current Texas A&M University coach Rob Childress. After graduating, McIntyre played for the Alexandria Aces in 1999 before joining the Blinn coaching staff in 2000.

Blinn has competed in intercollegiate athletics since 1903 and captured 29 NJCAA national championships since 1987. For more information on Blinn baseball, visit www.buccaneersports.com.