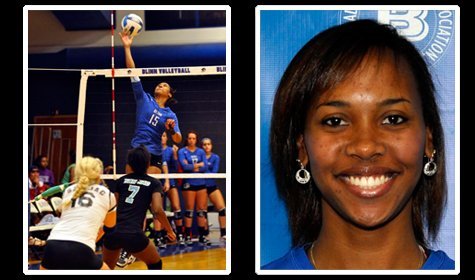 Blinn College All-American volleyball player Bruna Evangelista has been named the 2014 NJCAA Betty Jo Graber Female Athlete of the Year after leading the Buccaneers to the third national title in program history.

Evangelista is the first Buccaneer to win the award in its 21-year history.

An NJCAA and American Volleyball Coaches Association 2013 All-American, Evangelista recorded 584 kills (4.03 per set) and 157 blocks (1.08 per set) last season, including a 23-kill performance in the national title game against Tyler Junior College. She was named the national tournament MVP.

For her career, Evangelista recorded 852 kills in 1,712 attempts for a .383 hitting percentage.

“Blinn helped me with everything,” Evangelista said. “I grew so much as a volleyball player and as a person.”

Evangelista has signed with the University of Alabama to play volleyball next year.

“She has meant a lot to the program, not just on an athletic basis but on a personal basis,” coach Erin Mellinger said. “This award says a lot about who she is and what kind of athlete she is.”

Blinn volleyball defeated Tyler Junior College 3-1 to claim the national championship in Casper, Wyo., last November. The Buccaneers finished the season 39-3 and won all four matches at the tournament to claim the title. The Buccaneers earned a berth to the national tournament by winning five of six matches at the Region XIV Championships, defeating the team they would eventually play in the NJCAA finals for the regional title.

Blinn volleyball previously won the national championship in 2008 and 2011.

The award is named after Betty Jo Graber, a former Weatherford College women’s basketball coach, NJCAA women’s basketball committee chair and founding member of the NJCAA women’s division. Graber was a member of the inaugural Women’s Basketball Hall of Fame in Tennessee. The award is given annually to the NJCAA student-athlete who best exhibits her hard work, discipline, ethics and excellence.

Blinn has competed in intercollegiate athletics since 1903 and captured 29 NJCAA national championships since 1987. For more information on Blinn volleyball, visit www.buccaneersports.com.