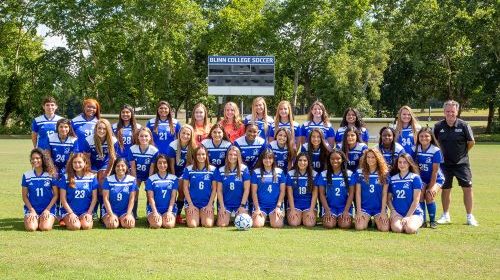 The Blinn College women’s soccer program recently received a Team Academic Award from the United Soccer Coaches as recognition of exemplary performance in the classroom during the 2019-20 academic year.

College Team Academic Award recipients are active members of the United Soccer Coaches College Services Program with a composite grade point average of 3.0 or better for all players on the roster throughout the academic year.

“I am really thrilled for the women’s soccer team to receive a national honor like this, especially with the program being so young,” head coach Michael McBride said. “This team has set the standard for the teams that come after them.”

Lindy Jenkins (Brenham) was named to the first team with a perfect 4.0 GPA. Hope Hillhouse (Amarillo), Jocelynn Lausell (Houston), Jannell Medellin (Houston), and Kajol Prasad (Murphy) were named second-team All-Academic for posting GPAs between 3.80 and 3.99, and Alyssa Cisneros (Katy), Keana Flores (Houston), and Olivia Porter (Chicago, Ill.) were named to the third team for maintaining a GPAs between 3.60 and 3.79.