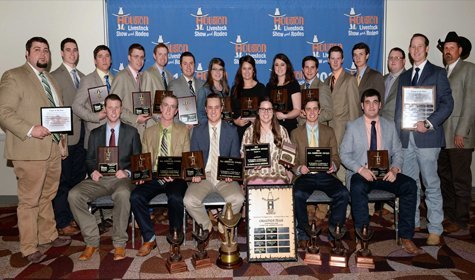 Blinn College cemented its claim as the top livestock judging team in the nation, capping the season with a victory at the 2015 Houston Intercollegiate Junior & Senior Livestock Judging Contest.

Blinn placed first in total points, oral reasons, beef cattle and sheep and goats, and placed second in swine. Blinn finished the 2014-15 season with victories in three of the four national events. Blinn also won at Kansas City and Denver, and finished in second at Louisville.

“These kids have worked hard and deserve all that they have received,” coach Brice Mund said. “As coaches, we couldn’t be more pleased with their success, but I am more proud of the people they have become.”

Coaches Joe Rathmann and Mund were named national coaches of the year. Warmke, Halfmann, Newberry and Martin were named to the Livestock Judging All-America team, giving Blinn more honorees than any other school in the nation.

“I think our success comes from practicing all the time and the support of our coaches,” said Warmke, a sophomore who plans to transfer to Texas A&M University in the fall. “There is definitely pressure that comes with it because you put a target on your back after winning the first national competition.”

Blinn’s Agricultural Sciences Program is one of the largest in the nation with almost 800 students enrolled – roughly four times the size of any other two-year agricultural program in the state. Blinn offers agriculture classes on all its campuses, with the W.J. “Bill” Rankin Agricultural Complex serving as the program’s hub. In addition to its excellence in the classroom, Blinn offers extracurricular educational activities in the areas of livestock judging, agriculture club, wildlife, agriculture mechanics, horticulture and agriculture sciences.