“Biggest Humanitarian Horror Story Of The 21st Century”: Up To A Million Refugees Trying To Flee Idlib [VIDEO]

The ongoing final battle for Idlib could unleash the biggest refugee exodus the nine-year war has seen, United Nations officials are warning.

Recent statements from the UN Office for the Coordination of Humanitarian Affairs puts the latest wave of civilian displacement since December 1 at 700,000.

Turkey’s Erdogan is now petitioning the US and NATO to given military assistance against the rapidly advancing Syrian Army backed by Russian air power. International reports suggest up to one million internally displaced persons are now surging toward the Turkish border. 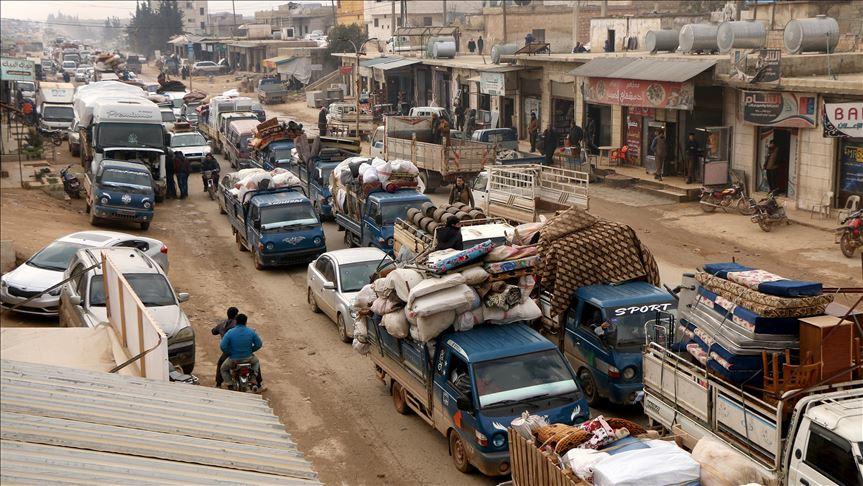 The Wall Street Journal reports that “Families in northwestern Syria are trapped between the advancing Syrian military — backed by Russian airstrikes and pro-Iranian militias — and Turkey.”

The report notes Turkey has sealed the border using its military:

“The border is closed to refugees, secured by walls, trenches and guards who have shot people trying to cross without permission,” according to the WSJ.

However, the WSJ fails to mention that the US-designated terrorist organization which rules Idlib on the ground, al-Qaeda faction Hayat Tahrir al-Sham, has for years terrorized the local population and has prevented them from leaving.

Estimates commonly put the total population of Idlib province at up to three million.

Media pundits are using heart-wrenching footage of massive fleeing refugee columns to argue for Western military intervention — despite the likelihood this would actually make the crisis worse.

OCHA: “The biggest humanitarian horror story of the 21st Century will only be avoided if Security Council members, and those with influence, overcome individual interests and put a collective stake in humanity first.” https://t.co/aaidFMazNe pic.twitter.com/jND87mtuhA

So far the United States has ignored calls to intervene against Russia and the Syrian government, after for years covertly funding and supplying many of the very jihadists now occupying the province.

But calls for US action are growing louder as the media has “rediscovered” the war in Syria after it long being out of the headlines, and as Assad has vowed to “liberate every inch” of the country.

#IDLIB: Civilians fleeing to Turkish border due to the Assad & Russia bombardment

Its happening… If the escalation in Idlib continues, another millions of refugees will appear in the borders of Turkey in the upcoming days.pic.twitter.com/4yi6dQrCdS

Throughout the war, surviving al-Qaeda and ISIS-linked factions from all over Syria have poured into the northwest province as their forces have been rolled back by pro-government forces. In many cases the families of anti-Assad insurgent jihadists have ended up there too, as it’s the last so-called “rebel enclave”.

This is why this week US coalition spokesman Col. Myles Caggins called Idlib “a magnet for terrorist groups” that are a “nuisance, a menace and a threat” to hundreds of thousands of civilians just “trying to make it through the winter.”

Thus the trapped civilian population is caught between a rock and hard place as they are under the bombs of a three-way war now involving the Syrian-Russian alliance fighting Turkey, as well as Turkish proxy jihadists as well as terror group Hayat Tahrir al-Sham.

Many civilians, including tragically many children, have also been documented as dying due to the extreme winter conditions of refugee camps.

The WSJ has cited opposition sources to say that nearly 370 civilians have died in the fighting so far this year, in what United Nations emergency relief coordinator Mark Lowcock has described as fast becoming “the biggest humanitarian horror story of the 21st century.”

This article appeared at ZeroHedge.com at:  https://www.zerohedge.com/geopolitical/biggest-humanitarian-horror-story-21st-century-million-refugees-trying-flee-idlib