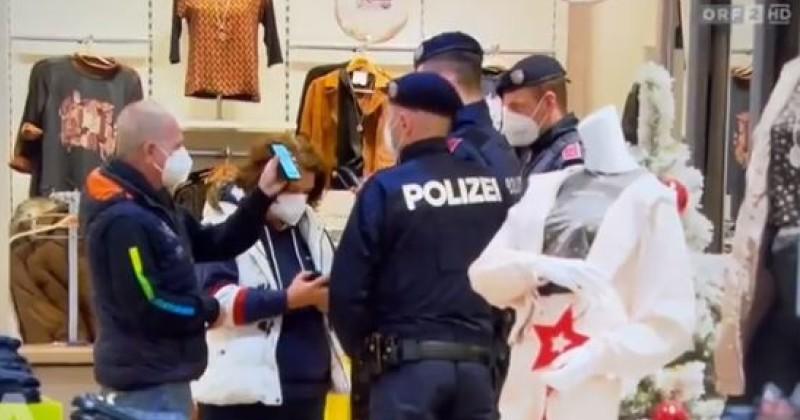 After the government put unvaccinated people under their own lockdown, video out of Austria shows police patrolling shops and highways checking people’s vaccination status.

In a move that was confirmed over the weekend, authorities have now imposed a lockdown that only affects the unjabbed, meaning they can only leave their homes for “essential reasons” such as food shopping.

These measures, which are the first of their kind in the world, impact the roughly 35 per cent of Austrians who haven’t had both doses of the vaccine.

The new rules were introduced as a result of a COVID spike and soaring ICU patients (because the vaccine works so well).

Another clip showed a police officer stopping a vehicle on a highway to check vaccination status.

Those caught outside without proof of vaccination face fines of up to $1,660.

Last week, Austria’s Chancellor Alexander Schallenberg said the lockdown was designed to make the unvaccinated “suffer” as everyone else had done during earlier lockdowns.

Whether these draconian patrols will continue remains to be seen.

After France introduced a vaccine passport system, video footage showed cops patrolling cafes and bars checking medical papers, although these patrols appeared to be designed to intimidate more than become routine because they largely stopped immediately after.

Many unvaccinated employees are being sent home in Austria because there isn’t enough testing capacity to allow them to obtain a negative result.

The government is also having to compensate businesses who are losing up to 35 per cent of their income from unvaccinated customers who are not allowed to enter their premises.

This article appeared at ZeroHedge.com at: https://www.zerohedge.com/political/austrian-police-patrol-shops-highways-hunting-unvaxxd