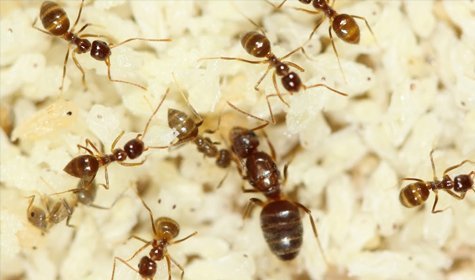 “The tawny crazy ant is an invasive species that came into Texas a little over 10 years ago in the Houston area and has been a problem in some residential areas there since that time,” said Dr. Charles Allen, AgriLife Extension entomology program leader/Texas A&M University entomology associate department head and state integrated pest management coordinator, based at San Angelo.

Though the ant is tropical in nature, Allen said entomologists fear the pest may expand its range into crops elsewhere in the state.“Much of the impact so far has been in urban areas where it is attracted to electrical circuits and can short them out, much as fire ants do,” Allen said. “But what we know about the ant leads us to believe it could be important, possibly very important, for an entirely different reason to Texas crop producers,” Allen said. 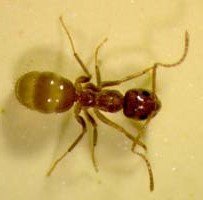 “We can’t say they have caused much damage to agriculture to date, but there is a potential for them to cause a significant amount of damage,” Allen said.

Dr. Danny McDonald, now at Sam Houston State University, earned his doctorate at Texas A&M University working on the tawny crazy ant. He said the tawny crazy ants, like a lot of other ants, protect and tend aphids and other pest insects that produce honeydew the ants eat. The main difference is the sheer numbers involved with the crazy ant.

What happens is an aphid population that initially may not be too serious, suddenly becomes explosive because the crazy ants are moving aphids in high numbers to their correct host plant where they protect them from many of the aphids’predators and parasites, McDonald said.

“So, if the tawny crazy ant does become important (as a threat to agricultural crops), this will be the reason,” Allen said.

“It’s not the ants themselves that are causing the damage to the ag crops. It’s the interaction they have with the aphids in protecting them and allowing their populations to grow to the point they damage the crop,” Allen said.

There are several ways aphids can damage crops, Allen said. They often reproduce very quickly, feed on plant sap and excrete a sugary honeydew, which falls onto leaves below aphid colonies. If they are not controlled by natural enemies, their populations may quickly grow to damaging levels. He said some aphids inject plant toxins as they feed, and some may inject viral disease organisms as well.

“Our objective now is to get information out to agricultural producers about the tawny crazy ant so if or when an ag producer suspects an infestation, they can let us know,” said Dr. Bill Ree, AgriLife Extension program specialist and pecan integrated pest management at Bryan.

Ree’s particular interest in the ant centers around its potential impact on the pecan industry, while other entomologists are keeping a sharp eye out for the pest on citrus and row crops.

In Florida, McDonald reported the insects have been documented as having mutualistic associations with 22 pest species, including aphids, lace bugs, mealybugs, psyllids, scale insects and whiteflies.

To date, Allen said the ant has been a pest in urban situations only.

The tawny crazy ant was formerly called the Rasberry crazy ant after Tom Rasberry, a pest management professional from Pearland who in 2002 first realized they were something new, said Allen. The accepted common name, tawny crazy ant, was established by a committee of the Entomological Society of America in 2012, he said.

“They call them crazy ants because they don’t trail like other ants, but move in all kinds of directions,” Allen said.

“They don’t have a single nest where the queen stays, but rather have multiple nests and queen areas; like a super colony made up of a lot of smaller colonies. In areas where these ants are, we have documented decreases in arthropod diversity and population densities,” he said. “Reduction of density and diversity of arthropods can fundamentally affect the proper functioning of an ecosystem and can result in a cascade of negative effects on populations of organisms that rely on them.

“These ants take over the environment. They are so competitive and develop such huge populations that they displace fire ants, and that’s saying something.”

Allen said though the ants are stingless, recent research has demonstrated that crazy ant formic acid can break down the alkaloid venom of fire ants. So when tawny crazy ants are attacked by fire ants, they coat themselves and their nestmates as a defense against the fire ant venom.

He said they’ve found a home along the Texas Gulf Coast but now have moved into San Antonio, Austin and the Bryan-College Station area, where they have been a significant nuisance to homeowners.

Allen said at this point nobody knows how far north the ants can survive cold weather.

“We’ve noticed it takes them awhile to get started in the spring, to get their numbers up, but by August and September they have huge populations working throughout the area they infest.”

Dr. Robert Puckett, AgriLife Extension entomologist at College Station, has been involved in tawny crazy ant research for several years. Puckett noted that at many infestation sites across southeast Texas ant densities appeared to be lower in 2014 than in past years. However, he and other researchers suspect this is due to colder and more persistent cold temperatures during the winter and spring of 2013/2014.

Allen said Ree, Puckett and McDonald have evaluated several insecticides, but have yet to find one that has provided effective long-term control.

“There are some pretty good materials that work for maybe a couple months in urban areas, but those pesticides are not labeled in agriculture,” Allen said. “So we’re lacking effective insecticides to help us out in agriculture.”

The entomologists said the ants’ trademark is their sudden appearance in huge populations. They are small and don’t move in straight lines but dart erratically one way and then another, which is the first tip to identifying them, they said. Beyond that, they are a small tawny-colored ant requiring expert scrutiny for identification.

Allen said the first step once tawny crazy ants are suspected is to contact the local AgriLife Extension agent who can refer them to an expert for positive confirmation.

Allen said aside from their potential damage to crops, there have been confirmed reports of the ants decimating honeybee apiaries.

“Honeybees are used on crops for pollination and if these ants are in a fruit orchard or citrus grove or similar crop that requires bees for pollination, they can basically cause the bees to leave the hives. They come in by the millions and swarm the hive. They drive the bees out and then feed on the immature stages of the honeybee.”

Allen said the ants can be accidentally introduced to a new location by anything from a relocated potted plant to an incoming oilfield drilling rig.


“These ants, of course, are associated with soil.  And in the oilfield, big machines are set up, left for a period of time, then packed up and moved, making it very easy to move these ants in soil still attached to the oilfield equipment,” Allen said. “In Louisiana, ants are showing up miles from areas previously infested and they appear to have been moved on oilfield equipment.”

Allen said sugarcane aphids, a new pest to most of the state that tore across Texas almost from border to border this year damaging grain and forage sorghum crops, could make prime honeydew-producing ant cows, but so far that has not happened.

“No one I know of has seen a tawny crazy ant/sugarcane aphid association yet,” he said. “However, when you have a honeydew producer like the sugarcane aphid, a cooperative relationship between the two would be a natural. Aphids suck up the plant’s sap for the protein and excrete the sugar water so plants get covered with sticky, shiny sugar water; perfect food for the tawny crazy ant.

“This ant is something that’s on the radar. It is not a problem in agricultural crops yet, but we know it’s out there and that it has the potential to cause damage.”