After 5 years Of Observing The Sun, NASA Has Some Beautiful Video They’ve Shared 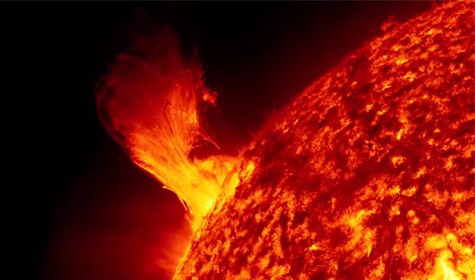 After 5 years of observing the sun NASA’s Solar Dynamics Observatory has captured some extraordinary images of our sun.  Just for some perspective, that 5 years is 1826 days of observing, 2600 terabytes of data and 200 Million images.  That’s a LOT!  NASA has released an awesome video of our sun in action.  The breathtaking video can be seen below or you can go to NASA’S YouTube page HERE.

February 11, 2015 marks five years in space for NASA’s Solar Dynamics Observatory, which provides incredibly detailed images of the whole sun 24 hours a day. Capturing an image more than once per second, SDO has provided an unprecedentedly clear picture of how massive explosions on the sun grow and erupt ever since its launch on Feb. 11, 2010. The imagery is also captivating, allowing one to watch the constant ballet of solar material through the sun’s atmosphere, the corona.

In honor of SDO’s fifth anniversary, NASA has released a video showcasing highlights from the last five years of sun watching. Watch the movie to see giant clouds of solar material hurled out into space, the dance of giant loops hovering in the corona, and huge sunspots growing and shrinking on the sun’s surface.

The imagery is an example of the kind of data that SDO provides to scientists. By watching the sun in different wavelengths – and therefore different temperatures – scientists can watch how material courses through the corona, which holds clues to what causes eruptions on the sun, what heats the sun’s atmosphere up to 1,000 times hotter than its surface, and why the sun’s magnetic fields are constantly on the move.

Five years into its mission, SDO continues to send back tantalizing imagery to incite scientists’ curiosity. For example, in late 2014, SDO captured imagery of the largest sun spots seen since 1995 as well as a torrent of intense solar flares. Solar flares are bursts of light, energy and X-rays. They can occur by themselves or can be accompanied by what’s called a coronal mass ejection, or CME, in which a giant cloud of solar material erupts off the sun, achieves escape velocity and heads off into space. In this case, the sun produced only flares and no CMEs, which, while not unheard of, is somewhat unusual for flares of that size. Scientists are looking at that data now to see if they can determine what circumstances might have led to flares eruptions alone.

Goddard built, operates and manages the SDO spacecraft for NASA’s Science Mission Directorate in Washington, D.C. SDO is the first mission of NASA’s Living with a Star Program. The program’s goal is to develop the scientific understanding necessary to address those aspects of the sun-Earth system that directly affect our lives and society.

This video is public domain and can be downloaded at: http://svs.gsfc.nasa.gov/goto?11742