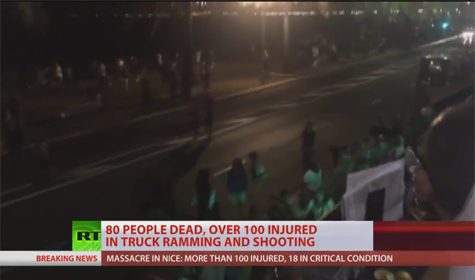 Another horrific attack, this time in Nice, France. Many dead and injured. When will we learn? It is only getting worse.

As we detailed earlier, in the latest European terrorist attack on French soil, a truck plowed into the crowd on Promenade des Anglais in Nice, France this evening during a fireworks show celebrating France’s Bastille Day holiday.

The truck was seen mounting the pavement and piling into anyone the driver could see, ramming over those who tried to run away.

According to latest reports, 80 people have been killed and over 100 injured.

The ‘truck was travelling at 60-70km per hour’ a local Nice Matin journalist on the scene reported:  A witness who gave his name as Antoine cited by Telegraph said: “We were at the Neptune beach and a firework display had just finished. That is when we saw a white lorry. It was going quickly at 60-70 kilometres an hour.”

The truck, whose driver was shot by the police, is shown below with its windshield riddled with bullets. It is said to have been carrying guns and grenades in what appears to have been part of a bigger plot.

The truck, captured below as it was speeding up, is said to have driven for 2 kilometers, mowing every person in its way.

#Nice Attack: truck driver got out of his vehicule and started shooting at crowd #BastilleDay https://t.co/zfHo1OFP2X

A video capturing the moment of the shooting:

The French government has called the attack an act of terrorism. It has activated the “ORSEC plan” to tackle a major emergency situation.

As news reports continue to come in about the deadly attack in #Nice, pro-#ISIS jihadists are copying the news and celebrating the massacre.

“It’s total panic,” a witness told the channel by telephone. “We saw a white lorry which drove directly into people on the Promenade des Anglais. A gunman fired into the crowd before being shot by police. Perhaps they are dead, I’m not sure.“

“Police are flooding the streets, including anti-terrorism officers.  Nobody knows what to do, except to hide away. Gunmen are meant to be targeting hotels.”

One eyewitness told France’s BFM TV: “Everyone was calling run, run, run there’s an attack run, run, run. We heard some shots. We thought they were fireworks because it’s the 14th of July.

“There was great panic. We were running too because we didn’t want to stick around and we went into a hotel to get to safety. “

Mayor of #Nice tweets “appears dozens may have been killed” after a truck drove into a crowd. @akhbar https://t.co/R3rxLQwih5

Horrible pictures coming in from #Nice #France reports suggest firefight btwn driver and sec forces after the attack pic.twitter.com/jaYb93wv2D

Local authorities state it is an attack and several gunshots have been heard, French TV reports.

Police and ambulances went to the scene and authorities from the local Alpes-Maritimes prefecture urged residents to stay indoors.

An AFP reporter described seeing a white van driving at high speed onto the famed Promenade des Anglais as people were leaving after the annual Bastille Day celebration display.

“We saw people hit and bits of debris flying around,” he said.

The alleged truck behind the attack:

According to the Telegraph, A truck has crashed into a crowd of revelers celebrating Bastille Day in the French city of Nice – prompting fears of terrorism. Horrific images depicting men and women lying on the side of a road close to the Promenade des Anglais appeared on social media.

Fireworks were filling the night sky as the drama unfolded, as the crowds enjoyed July 14th, which is always a Bank Holiday in France.  The country is still under a State of Emergency following last year’s attacks on Paris, when almost 150 people were murdered by Islamic State and Al-Qaeda operatives.

Both groups are well known for driving vehicles into innocent people, prompting fears that tonight’s incident could be linked to their activities.

Bastille Day, which celebrates the storming of the Bastille prison in Paris during the French Revolution of 1789, is the country’s biggest public holiday.

“There are people in blood, probably full of wounded,” a reporter for the Nice Matin newspaper said.

This Article appeared at ZeroHedge.com at:  http://www.zerohedge.com/news/2016-07-14/terrorism-feared-after-truck-drives-crowd-nice-france-killed-dozens