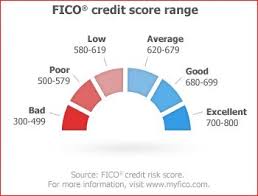 The creator of the FICO score, the most common measure of Americans’ credit rating, will roll out a new scoring system in 2019 that takes into account how consumers manage their bank accounts in order to specifically try to boost credit scores. It’s a large shift for the FICO score and will be one of the biggest changes to the system since the 1990’s, when it rose to prominence as the standard. The new score is going to be called the UltraFICO and is being designed specifically to boost the number of approvals for credit cards and loans.

The calculation for the new score has been in the works for years and comes as a result of lenders looking for new ways to boost approvals for borrowing, i.e., burying US consumers under even more debt.

The UltraFICO score will take some borrowers and applicants with poor traditional FICO scores, and give the lender a basis to recalculate the person‘s credit. Those who have “at least several hundred dollars” in their bank accounts and those who don’t overdraw their accounts are likely to see their scores rise, according to a new Wall Street Journal article. Specifically, anybody with an average balance of $400 in their bank accounts without an overdraft history over the last three months would likely get a boost.

FICO thinks that about 7 million potential applicants would be affected by the new calculation and new system, and 26 million subprime borrowers could wind up with higher credit scores as a result. Four million of these borrowers should expect to see an increase of at least 20 points.

David Shellenberger, FICO’s senior director of scoring and predictive analytics, told the Wall Street Journal that “…the new score is designed to prevent risky borrowers from appearing more creditworthy than they are, by reflecting positive financial behavior that was previously invisible.” He also stated that FICO was “very focused” on its “ability to separate future good borrowers from bad borrowers.”

In addition, applicants are reportedly going to be able to choose specifically what bank accounts they want considered when their scores are recalculated. FICO is already in the midst of working with several banks and financial companies that have expressed interest in using this new score in a beta test. While over the last 10 years lenders have been wary of less creditworthy borrowers, the pool of high quality borrowers has been exhausted.

And, as a result, just like the US monetary policy, when the system doesn’t work in the bank’s favor the solution is simply to rig the system. Lenders have been asking FICO to figure out a way to help them boost lending without appearing to take on more risk. That’s not all: even regulators have reportedly expressed some interest in trying to “increase access to affordable lending” for those who are on the lower end of the FICO score spectrum.

But this is happening at a time when the lower end of the FICO score spectrum is as thin as its ever been. US consumers have their highest average FICO scores in years. Specifically, 58.2% of US consumers have a score of 700 or higher and the average score is now 704. Most lenders and banks consider under 670 as “subprime”.

Unfortunately, this artificial credit rating boost couldn’t be happening at a worse time, with the US economy almost a decade into a credit cycle that has shown recently may be on the verge of correcting. Meanwhile, consumer credit, auto loans and personal loans are all at or near record highs and lenders are looking for a way to keep the bubble growing.

And this isn’t the first move that’s been made to “rig” credit scores. This change comes about a year after the three major credit bureaus started deleting most tax lien and civil judgment information from credit reports. In 2014, the agencies also put less weight on medical bills in collections and excluded accounts that consumers had paid or settled with collection agencies.

All in the name of putting just that extra lipstick on the American consumer pig in hopes of extending the business cycle for a few more months.

This article appeared at ZeroHedge.com at:  https://www.zerohedge.com/news/2018-10-22/7-million-americans-are-about-get-artificial-boost-their-fico-scores