More rioting and looting broke out in American cities this week. This time, it was Philadelphia consumed by violence after a police shooting.

According to ABC News, at least 30 police officers have been injured in the violent unrest, while dozens of people have been arrested for rioting or vandalism. Mobs have descended on Walmart and rushed out carrying TVs, while other agitators ransacked Footlocker for new sneakers. The full number of businesses ravaged by the destruction is increasing and still being tallied.

Update: The School District of Philadelphia shut down most of its buildings Tuesday, a day after looting and a fatal police shooting. District headquarters, and buildings that serve as satellite elections offices, will remain open. https://t.co/5JV7EhOomh pic.twitter.com/hQcgj4Mgjb

This latest outbreak simply adds to the thousands of businesses, from Chicago to Minneapolis and beyond, that have been rioted, ransacked, burned down, or looted in the ongoing period of political unrest over police brutality, both real and imagined. All told, the damage from rioting in recent months will exceed any past period of civil unrest in American history, with even modest under-estimates putting the total cost at up to $2 billion.

The outbreak of mass rioting and looting across America is alarming in its own right, but equally chilling is the public’s support for the violence. As first reported by the Washington Examiner’s Paul Bedard, a new poll finds that college students in particular overwhelmingly believe that rioting and looting is justified.

Pollster @JMcLaughlinSTK 'Nearly two-thirds, say the rioting and looting is justified. What are these kids learning? That’s scary.https://t.co/xOPag2GWcc

The poll was conducted by Mclaughlin & Associate in conjunction with Yale University’s conservative William F. Buckley Program. It surveyed a nationally representative sample of 800 college students on a wide array of issues, from the coronavirus to race in America.

One key finding from the poll was that 64 percent of college students agreed that “the recent rioting and looting is justified to some degree.” Only 28 percent disagreed with this assessment. 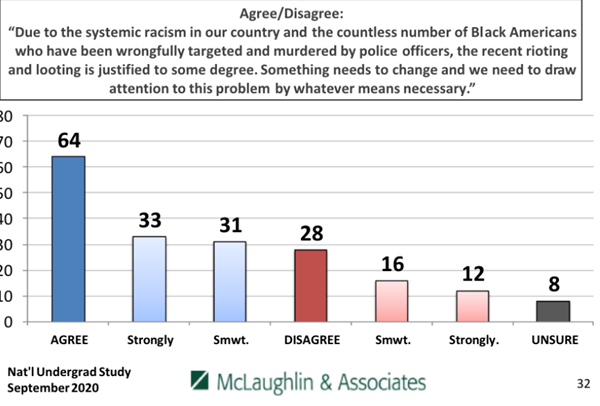 What this result really conveys is that many of today’s young people neither understand nor respect the importance of property rights in a free society. And this is deeply misguided. Even if you’re concerned about racism in America and support criminal justice reform, property rights are essential.

The human right of every man to his own life implies the right to find and transform resources: to produce that which sustains and advances life. That product is a man’s property. That is why prop­erty rights are foremost among human rights and why any loss of one endangers the others.

Many left-leaning young people likely rooted their disdain for property rights in the notion that they only really matter to “Big Business” or “the rich.” (And themselves, of course). This is mistaken. In fact, the rich, safe neighborhoods aren’t the ones being looted. The destructive acts are disproportionately victimizing urban, poorer neighborhoods and minority-owned businesses.

And the long-term fallout of attacks on property rights haunts society’s most vulnerable the most. As famed economist Thomas Sowell put it, property rights “belong legally to individuals, but their real function is social, to benefit vast numbers of people who do not themselves exercise these rights.”

Why? Well, property rights are the foundation of a capitalist economy.

The calculation of costs and benefits that underlies a profit-driven economy relies on the protection of property rights. If business owners and investors can’t feel secure in their property in an area, they take their investment elsewhere. This means that in areas that are looted, there are fewer jobs and fewer opportunities over time.

So, if young people really care about social justice, they shouldn’t downplay and justify looting. They ought to understand that no matter the cause, violating property rights isn’t “progressive” at all.

This article appeared at FEE.org at:  https://fee.org/articles/65-of-college-students-say-rioting-and-looting-is-justified-new-poll-finds/