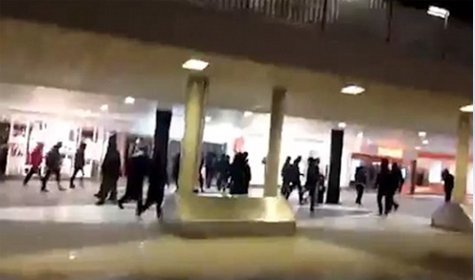 Sweden is losing its patience with refugees.

In the wake of the sexual assaults allegedly perpetrated by men of “Arab origin” in Cologne, Germany on New Year’s Eve, the Swedish press revealed what certainly appeared to be a coverup related to a wave of similar incidents that apparently occurred at a youth festival and concert in central Stockholm’s Kungsträdgården last August.

That ruffled the feathers of quite a few Swedes and then, earlier this week, we learned that a 22-year-old asylum center worker was murdered in a knife attack carried out by a 15-year-old Somali migrant named Youssaf Khalif Nuur, shown below.

Alexandra Mezher (the victim) had been working at the shelter in Molndal for “a few months” when she was killed while working a night shift.

And speaking of unaccompanied refugees, Stockholm’s central train station has apparently been overrun by Moroccan migrant children who, according to reports, spend their days drinking, stealing, and accosting women.

On Thursday, Interior Minister Anders Ygeman said the country is set to deport some 80,000 of the 163,000 people who entered the country seeking shelter last year, but that wasn’t good enough for the “football hooligan scene”, who on Friday night “went on a rampage” at the train station in Stockholm where “hundreds” of masked men beat migrant children.

“A mob of black-clad masked men went on a rampage in and around Stockholm’s main train station last night beating up refugees and anyone who did not look like they were ethnically Swedish,” The Daily Mail reports. “Before the attack, the group of 200 people handed out xenophobic leaflets with the message ‘Enough now’.”

The “thugs” were “allegedly linked to Sweden’s football hooligan scene” – whatever that is.

“I was passing by and saw a masked group dressed in black … start hitting foreigners,” one witness said. “I saw three people molested.”

And here’s the text of the flyer the “football hooligans” distributed ahead of the assault to wrest control of the train station from the iron grip of preteen Moroccan migrant children:

All over the country, reports are pouring in that the police can no longer cope with preventing and investigating the crimes which strike the Swedish people.’

‘In some cases, for example, in the latest murder of a woman employed at a home for so called ‘unaccompanied minor refugees’ in Molndal, it goes as far as the National Police Commissioner choosing to show more sympathy for the perpetrator than the victim,’ it continues.

‘But we refuse to accept the repeated assaults and harrassment against Swedish women.’

‘We refuse to accept the destruction of our once to safe society. When our political leadership and police show more sympathy for murderers than for their victims, there are no longer any excuses to let it happen without protest.’

‘When Swedish streets are no longer safe to walk on for normal Swedes, it is our DUTY to fix the problem,’ the leaflet reads.

‘This is why, today, 200 Swedish men gathered to take a stand against the north African ‘street children’ who are running rampage in and around the capital’s central station.’

‘Police have clearly showed that they lack the means to stop their progress and we se no other way than to hand down the punishment they deserve ourselves.’

‘The justice system has walked out and the contract of society is therefore broken – it is now every Swedish man’s duty to defend out public spaced against the imported criminality.’

‘Those who gathered today are neither your politician, your journalist or your policeman. We are your father, your brother, your husband, your colleague, your friend and your neighbour.

You’ll recall what we said in the wake of Mezher’s murder: “Yes PM Löfven, we believe that you are correct to say that ‘there are quite many people in Sweden who feel a lot of concern’ and make no mistake, if European politicans do not find an effective way to get the situation under control, the public will remove them – either with the ballot or with the torches and pitchforks.”

The text of the leaflet distributed ahead of the train station “rampage” is proof positive that at least some Swedes are prepared to stage an open revolt against a government they now view as standing in violation of the social contract.

When social contract theory breaks down, you’re left with a Hobbesian state of nature and as you can see from the video shown above, it is indeed “nasty and brutish” and may well end up being quite “short” for the hundreds of unaccompanied North African migrants who fled their countries for the “safety” of Sweden.

There was no word on whether the “football hooligan” crowd managed to retake the station or whether the Moroccan migrant children remain dug in.

This article was posted at ZeroHedge.com at:  http://www.zerohedge.com/news/2016-01-30/200-swedes-storm-occupied-stockholm-train-station-beat-migrant-children