TxDOT’s Debt, Texas Roads, & Prop 1; What You Should Know 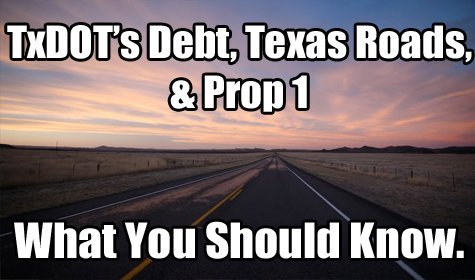 The Texas Transportation Funding Amendment, Proposition 1 is on the November 4, 2014 general election ballot in the state of Texas as a legislatively-referred constitutional amendment.

The measure would divert half of the general revenue derived from oil and gas taxes from the Economic Stabilization Fund (ESF), also known as the Rainy Day Fund, to the State Highway Fund for the purpose of providing transportation funding for repairs and maintenance of public roads. It’s anticipated that this will result in approximately $1.2 billion per year going toward transportation funding instead of the Rainy Day Fund. If approved, the measure would take effect immediately, once the votes are certified, and would apply to transfers the comptroller made after September 1, 2014.

The Rainy Day Fund, was established by voters in 1988. The fund allows the state to save money and allocate excess revenue that can be used during times of financial stress. It can assist in balancing the budget, safeguard against unexpected economic downturns and prevent states from slipping into a deficit. Each year, the fund receives revenue from 75 percent of any oil and gas production taxes that are greater than the amount collected in fiscal year 1987. It also receives half of any balance remaining in the general revenue fund at the end of a fiscal biennium.

The official ballot title will appear as follows:

Texas needs $4.6 billion annually to maintain and fund the current road and bridge budget.  This is the highest in the nation according to polls.

If approved by voters, Prop 1 lessens that burden without new taxes, tolls or fees – that can only be used for construction, maintenance, rehabilitation, and acquiring right-of-way for public roads. These funds cannot be used for toll roads. HB 1, a related bill that was also approved by the Texas Legislature in 2013, put these requirements in place.

Prior to 2000 Texas was pay as you go with its state highways. Starting in 2001, Texas started borrowing money for new road construction, pushing that cost onto future taxpayers. By 2011 the debt had grown from zero to $11.9 billion.  Currently, Texas is $23 billion in debt and will spend $31 billion over the next 20 years to retire that debt.

The House Research Organization published a focus report examining Proposition 1. The following are excerpts from the report detailing arguments in support of the measure:

The House Research Organization published a focus report examining Proposition 1. The following are excerpts from the report detailing arguments against the measure: