This Is How You “Boost” GDP: US Sells Over $4 Billion In Weapons To Israel, Iran And Saudi Arabia 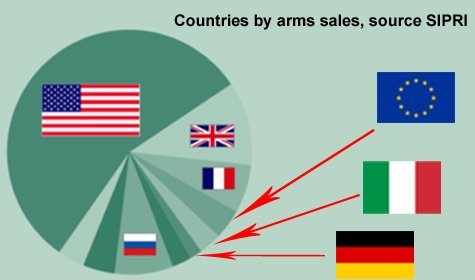 War, what’s it good for?

Aside from countless deaths of innocent civilians of course, it means a GDP boost for the biggest exporter of weapons on earth, the United States, and even more profits for the US military-industrial complex. Profits which mean the shareholders of America’s arms manufacturers get even richer.

Which is why following months of middle-eastern sabre ratling and numerous quasi-wars already raging in the region, the U.S. State Department approved the sale of 10 MH-60R Seahawk helicopters to Saudi Arabia for $1.9 billion, the first step in “a major multibillion-dollar modernization of the Saudi navy’s eastern fleet.”

According to Reuters, the Pentagon’s Defense Security Cooperation Agency (DSCA) notified lawmakers on Thursday about the possible arms sale, which has been discussed for years.

The Saudi government had requested a sale of the 10 MH-60R multi-mission helicopters, built by Sikorsky Aircraft, a unit of United Technologies Corp and Lockheed, as well as radars, missiles and other equipment, the agency said.

Why do the Saudis need a modernization of their already state of the art weapons?

The proposed sale would improve Saudi Arabia’s capability to meet current and future threats from enemy weapons systems, as well as secondary missions such as vertical replenishment, search and rescue, and communications relay.

“Saudi Arabia will use the enhanced capability as a deterrent to regional threats and to strengthen its homeland defense,” the agency said.

In other words, the Saudis, by funding ISIS, are creating the very “regional threat” (which recently has launched numerous false flag attacks against the same Saudi Arabia to provide the cover for needing such a modernization) that they need to wage war against.

Wait, wasn’t the US said to have tarnished its relations with Israel in recent months following various diplomatic snubs by Netanyahu and Obama? Well, it was all for show: according to Israeli media deal is seen as “compensation” for the rapprochement between Iran and the US.

Curiously, this is precisely what we wrote two weeks ago in “Obama’s Real Motive Behind The Iran Deal: A Backdoor Channel To Sell Weapons To Saudi Arabia” only we can now add Israel in the mix.

“The proposed sale of this equipment will provide Israel the ability to support its self-defense needs,” the US Defense Security Cooperation Agency said, adding that the new contract is meant to“replenish”Israel’s arsenal without supplying the country with any kind of new weapons.

In November 2014 it was reported that Pentagon was going to supplying Israel with 3,000 smart bombs, similar to those used by the Israeli Air Force in Gaza last summer, where an estimated 100 tons of munitions were dropped.

So “modernizing” the Saudi arsenal and “replenishing” that of Israel.

In other words, Obama’s warming up to Iran was nothing but a back door diplomatic loophole to arm Iran’s “threatened” neighbors in the region. Just as we forecast.

As for the beneficiaries, once again there is no question: the main contractors to fulfill the lucrative Israeli arms deal will be Boeing, Ellwood National Forge, General Dynamics, Lockheed Martin and Raytheon Missile Systems, AFP reported.

But wait, there is even more!

Because, just in case arming Israel and Saudi Arabia with sophisticated modern weaponry isn’t enough to assure of a full on war in the coming weeks as the balance of power in the middle east once again shifts dramatically, the US – to really make sure America’s MIC has even more happy repeat customers, will also deliver 2,000 AT-4 anti-tank rockets to Iraq as early as next week, 1,000 more than announced on Wednesday, to help Baghdad combat suicide car bombings by Islamic State.

Warren said the anti-tank weapons would allow the Iraqi forces to destroy approaching suicide car bombers at a distance. Relying on small arms requires disabling the engine or killing the driver, which can be difficult, he said.

And all of this why? So that the Saudis and Iran can “fight” against a Saudi-funded ISIS force, while Israel has “defensive” weapons against an Iran which may become a threat to Israel because of its recently friendly relations with the US.

Or, to conclude with the same summary we provided two weeks ago when predicting this outcome:

In other words, we have, for the past few years, been on the edge of a razor thin Middle Eastern balance of power equilibrium which prevented any one nation or alliance from garnering an out-sized influence of military power.

All of that is about to change the moment the MIC figurehead known as president Obama green-lights the dispatch of billions of dollars in fighters, drones, missile batteries, and surveillance equipment to Saudi Arabia and its peers, in the process dramatically reshaping the balance of power status quo and almost certainly leading to yet another middle eastern war which will inevitably drag in not only Israel and Russia at least in a proxy capacity, but ultimately, the US as well.

Just as the US military industrial complex wanted.

Because as every Keynesian fanatic will tell you: in a world saturated by debt, and where organic growth is no longer possible, there is only one remaining option.

Record-Breaking Migration Out of California and Illinois Continues in 2022