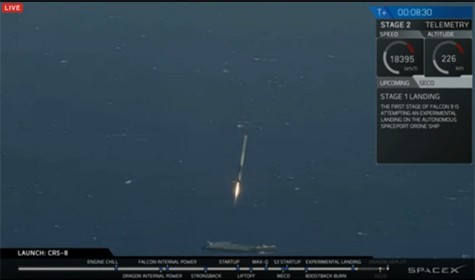 Space X has reached another first!  They successfully landed a reusable Falcon 9 rocket booster today on a barge on water.

Here is on-board footage tweeted by Space X as their Falcon 9 Rocket lands on the ship.

Onboard view of landing in high winds pic.twitter.com/FedRzjYYyQ

So, why is this such a big deal?  As Phil Plait of Bad Astronomy explains:

the first stage booster is moving eastward at about 6,000 kph (3,600 mph) when its engine cuts off (the second stage takes over from there). The booster has to flip over, slow down, put itself on the right trajectory, come in over the floating barge, then relight its engines at just the right amount to kill its velocity and land upright.

Before the historic landing the rocket had been sent to resupply the international space station.