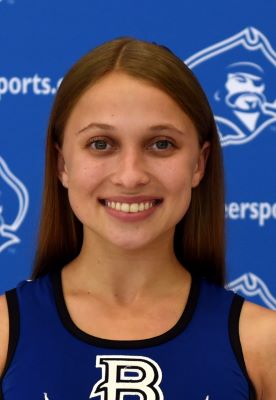 The Blinn College District has named cheerleader Bailey Rubal the winner of the 2020 Dr. James H. Atkinson Cup as the Blinn student-athlete with the highest cumulative grade point average.

A sophomore from Missouri City, Rubal maintained a perfect 4.0 grade point average (GPA) throughout her two years at Blinn.

“I could not have asked for a better person or athlete to represent our program,” said Sarah Barland Flisowski, Blinn cheer coach. “She knew that there is a separation between academics and athletics and got her schoolwork done to achieve in the classroom. She wanted to go to the University of Texas from the beginning and knows what it takes to transfer into a big school like that.”

Blinn cheer earned its national title in Small Coed Division II with a score of 95.42 to hold the record of six straight national championships in their division.

In 2020, the National Cheer Association & National Dance Association Collegiate Cheer and Dance Championships were cancelled due to COVID-19.

“I went to Blinn for cheer, but my spirit coordinator never failed to remind me that academics always comes first because it is a walkway to my future,” Rubal said. “I had a lot of really good teachers and it was always fun to study with my teammates.”

Next year, Rubal plans to cheer for The University of Texas and major in public relations.